Mississippi Flag Comes Down at Capitol 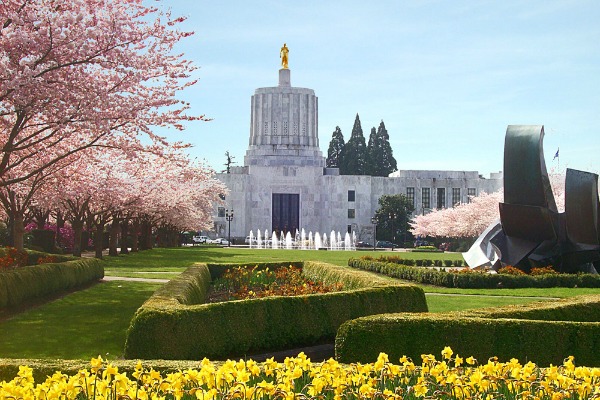 When Bree Newsome -- an activist and filmmaker associated with the national Black Lives Matter movement -- scaled a flag pole at the South Carolina state house last June and removed the Confederate battle flag, she sparked a national conversation.

Activists and lawmakers across the country started to ask why the flag is still prominently displayed at so many government buildings, in the south and elsewhere, when it’s widely recognized as a racist symbol and was embraced by Dylann Roof, who killed nine people during a prayer meeting at a Black church last summer.

In Oregon, the conversation zeroed in on the presence of the Mississippi flag – which includes a Confederate battle emblem as part of its design – in the “Walk of Flags” display on the capitol grounds in Salem. That display included flags from all 50 states as well as Oregon’s nine federally recognized Native American tribes.

Now it’s down one. Mississippi’s flag was removed at the beginning of last week.

Last October lawmakers decided to give Mississippi the chance to change the design of its own flag. According to a letter dated March 7 and co-signed by Senate President Peter Courtney and House Speaker Tina Kotek and sent to their Mississippi counterparts – Terry Burton, president pro tempore of the Mississippi senate and Mississippi House Speaker Philip Gunn – it was only after Mississippi failed to act that Oregon decided to take down that state’s flag.

Mississippi lawmakers drafted 12 different bills to alter the state’s logo design – but none of them made it out of committee by the legislature’s February deadline.

In response to a query about the flag’s removal, Courtney’s office issued a statement containing some of the same language as the letter to the Mississippi legislature, but also noting Oregon lawmakers are not alone in their objection to the continued display of Confederate insignia.

“Across the country, other government entities removed the Mississippi flag from displays. In the State of Mississippi, universities, counties and cities – including the capital city of Jackson – refused to fly the official  flag of the state,” the statement said.

Last fall, Kotek said she supported the effort to remove the flag from Capitol grounds.

"The Confederate insignia on the flag is widely seen as a symbol of racist intolerance, which is in direct conflict with Oregon values of fairness and equality. I support removing it from our Capitol grounds and leaving the flagpole unadorned until Mississippi adopts another flag, one that honors the dignity of all people,” Tina Kotek, speaker of Oregon’s House of Representatives, said last October.

"I grew up with this flag, and it was used around me for the same reasons it even exists," Rep. Lew Frederick, D-Portland, said in June. "To taunt African Americans, to remind us of our status in the historical South, and to remind us of exactly what it symbolizes to those who carry or display it: racism and their attachment to racism."

Both that statement and the letter to Burton and Gunn close with the hope that Oregon will be able to hoist a redesigned flag in the future: “It had been our sincere hope that Mississippi would always be represented in our Walk of Flags. We now look forward to the day when Oregon can raise a new flag representing the great state of Mississippi and her people.”