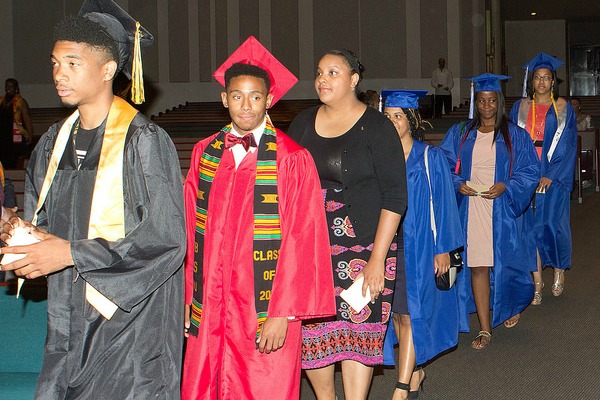 An estimated 500 college-bound students from across the state of Oregon have already registered for the 2016 Black Student Success Summit at Portland State University this weekend, and there is room for more.

Organizer Noni Causey has grown her vision for the March 5 program into a fully-fledged education and job fair with 20 workshops; employers including Intel; 10 colleges; and a whole lot of young people looking to support each other in the professional world.

“And it's a very positive place to be,” Causey said.

College officials at the time said the program had run out of money, but within a year former PCC President Jeremy Brown was forced out of his job, with a $300,000 severance from the college.

Left without a venue, Causey didn’t give up advocating for culturally competent education. Last year she helped re-launch the Black Baccalaureate program for high school students -- a major accomplishment for local families pushing to keep their kids interested in school.

Oregon’s high school graduation rates are among the lowest in the nation for students of all races. That’s why Causey said she has expanded her approach to reach kids as young as middle school through a new program for young teens called the Middle Passage to Education, held in January.

Almost 100 middle schoolers showed up a few weeks ago for the first Black Student Success Summit tooled just for them. Causey said high schoolers and college students volunteered their time at the event to support the youngsters’ goals and visions for the future.

“I'm from Portland, Oregon and so I'm a product of the school system here,” she said. “I remember a time when I used to have Black teachers, before the school district started busing students.

“Now you talk to students and they don't have Black teachers, they don't see themselves in the curriculum, they need time to be together and have connections to other students and adults that look like them,” Causey said.

Her big idea is to bring in people from outside of education. “So we bring in community, we bring in businesses; we are actually trying to create a pipeline,” she said.

“My thought is that if we continue to do what we've done, we’ll continue to get what we’ve got.”

Causey said she was inspired to dedicate her life to student success when she was in graduate school.

“When I was working for the community college, I was watching a lot of students take anywhere between three and ﬁve years to get a two-year degree,” she said. “A lot of our students were walking out with $30,000 and $40,000 worth of debt and I thought it was outrageous.”

Black students bear the burden of an educational system that doesn’t work for them starting in grade school, she said.

“They come out of inefﬁcient schools. Sometimes when they make it to the college it takes a long time to get out of developmental education and then onto your one and 200 level classes.

“This year we have a forensic scientist, we have doctors and lawyers, STEM (science, technology, engineering and math) people, we have Intel,” she said. “We have people from all kinds of different industries so students are able to see what they could be.”

For more information on the 2016 Black Student Success Summit go to www.beamvillage.org.