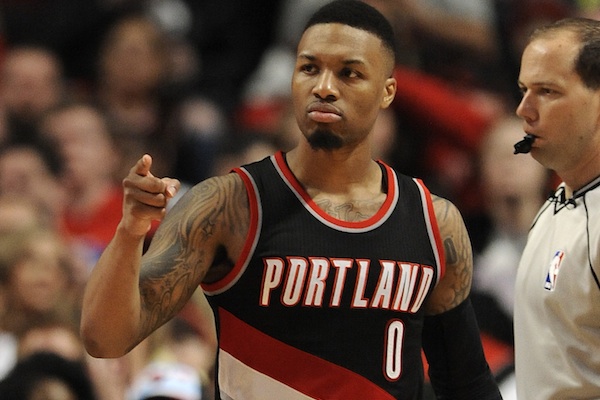 Lillard hit the 30-point mark for the sixth time in seven games, and Mason Plumlee added 16 points and nine rebounds. Gerald Henderson scored 13 and the Trail Blazers got back to winning after blowing a 21-point lead in a home loss to Houston two nights earlier.

"We had a meltdown," Lillard said. "It was a tough loss for us. ... We bounced back. We didn't let it roll over. We didn't come out here and not play well. We answered the call."

Portland led by 10 at halftime and came up with enough stops down the stretch to hand Chicago its second loss in two nights.

The Bulls got a triple-double from Pau Gasol along with big performances from E'Twaun Moore and Doug McDermott, but fell short with Derrick Rose (sore right hamstring) missing his third straight game.

Gasol had 22 points, 16 rebounds and a career-high 14 assists. Moore scored all but two of his 19 in the second half.

McDermott scored 18, his career-best fifth straight game in double digits. Bobby Portis added 10 points and 16 rebounds for Chicago, but it was an all-too-familiar result for a team that had won three in a row before dropping the past two.

"It's up to us to continue to compete, continue to do the right things on the floor, play like every game is critically important, because it is. And they are," Gasol said. 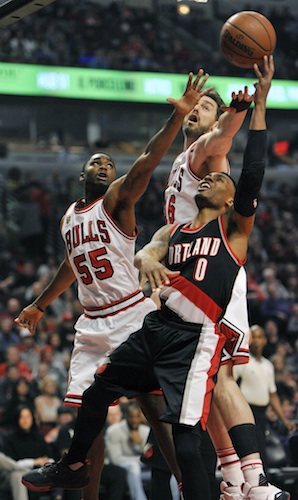 PHOTO: Portland Trail Blazers' Damian Lillard (0) goes up for a shot against Chicago Bulls' Pau Gasol (16) and E'Twaun Moore (55) during the first half of an NBA basketball game Saturday, Feb. 27, 2016, in Chicago. (AP Photo/Paul Beaty)

After McDermott hit three free throws to cut Portland's lead to 86-83 with 7:15 remaining, Henderson nailed a 3-pointer for the Blazers. Lillard then got fouled as he flipped in a 13-foot baseline floater and hit the free throw, and Ed Davis added a layup that made it 94-83 with just under 5 minutes left. Davis also blocked Mike Dunleavy Jr.'s attempted layup with just more than 2 minutes remaining and the lead at six.

"I think that block on Dunleavy down the stretch was so big," Plumlee said.

"It's tough," Hoiberg said. "I'd be lying if I told you differently."

Even so, he is seeing more movement on offense. And if that continues when the injured players return, Hoiberg said the Bulls will "have a chance to win some games down the stretch."

Trail Blazers: Chicago product Cliff Alexander said he was excited to return home even if he was inactive. "Everybody wanted tickets to the game. I couldn't give everybody tickets," he said. "I have 13. My mom, dad, grandma, my high school coaches." A top recruit, Alexander played a year at Kansas before signing with Portland as an undrafted free agent last summer. Alexander has appeared in just seven games for the Trail Blazers.

Bulls: There was a moment of silence before the game for Eddie Einhorn, a Bulls board member and minority owner of the Chicago White Sox. Einhorn died Tuesday following complications from a stroke. ... Hoiberg said Rose is improving but still experiencing pain when he "tries to explode off" his leg. ... Butler got an encouraging report on his strained left knee, with an MRI showing the swelling is subsiding. Butler has been sidelined since Feb. 5.