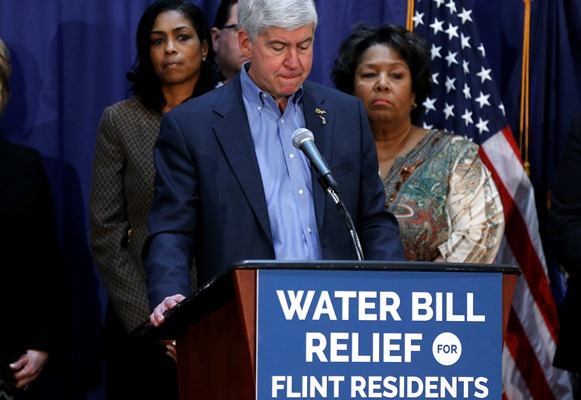 LANSING, Mich. (AP) — Two lawyers in Michigan Gov. Rick Snyder's office urged his top aides to switch Flint back to Detroit's water system only months after the city began using the Flint River, with one calling the use of the river "downright scary" even before lead contamination concerns came to light, according to emails.

In an email to then-chief of staff Dennis Muchmore and others, Brader requested that the governor's office ask Flint's emergency manager to return to Detroit's system on Oct. 14. She said it was an "urgent matter to fix," citing E. coli problems and a General Motors plant's switch to different water because Flint's water was rusting engine parts.

Gadola quickly wrote that the idea of using the Flint River as a drinking water source was "downright scary."

Flint "should try to get back on the Detroit system as a stopgap ASAP before this thing gets too far out of control," he said.

"Too bad (former Flint emergency manager Darnell Earley) didn't ask me what I thought, though I'm sure he heard it from plenty of others," Gadola wrote to Brader, Muchmore, then-communications director and current chief of staff Jarrod Agen and deputy chief of staff Elizabeth Clement. "My Mom is a City resident. Nice to know she's drinking water with elevated chlorine levels and fecal coliform."

The state ultimately helped Flint switch back a year later, after improperly treated water corroded old pipes and leached lead into homes and businesses. Elevated levels of lead have been found in some children's blood. Lead contamination has been linked to learning disabilities and other problems.

Muchmore told the News that Gadola and Brader's advocacy for Flint switching back to Detroit water until the new Karegnondi Water Authority pipeline could be completed was the prevailing thought in Snyder's office at the time. But he said Treasury Department officials concluded the cost to reconnect Flint to Detroit water — an extra $1 million per month — was deemed more than the cash-strapped city could afford.

Muchmore, who now works for a law firm, told the Free Press that he and the others had discussed their concerns with the governor.

Gadola is now a Court of Appeals judge. Brader is the executive director of the Michigan Agency for Energy.

"Flint residents should not have to pay for water they cannot drink," he said.

The money will pay for 65 percent of the water portion of the bills. That includes water used for drinking, cooking or bathing. Residents will still have to foot the sewage portion of their bills. The Republican-controlled Legislature had shot down Democrats' efforts to double the aid to cover people's entire water bills.