The Stories of Our Neighborhood Talks Community, Gentrification 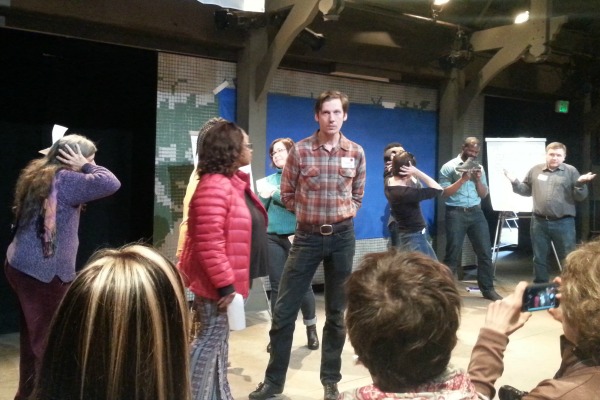 Twenty people took the stage to tell the story of their Northeast Portland neighborhood. They each chose a moment in time that was important to them.

People from these eras came face to face for a dialogue about race, displacement and community. The, event, The Stories of Our Neighborhood, was held at the Portland Playhouse Feb. 20.

The organizer of this meeting, Tanisha Jones the owner of the strategic marketing firm Homegirl Consulting, said it was created to bring together members of the neighborhood who have been affected by gentrification and to honor these different perspectives.

“I think we are at a crossroads right now, where there is a lot of divisiveness with people feeling pushed out and those who are benefitting from gentrification are thinking... how can we help?” Jones told The Skanner News.

The community conversation was facilitated by Resolutions Northwest who use conflict resolution approaches to advance racial and social justice causes. The Portland Playhouse partnered with Homegirl Consulting, Alberta Main Street, the NE Coalition of Neighborhoods, La Bonita, At Your Service International and New Seasons Market on this project.

Drawing on the inspiration of the theater-venue, facilitators Keela Johnson and Theresa Logan used drama techniques to guide the gathering through racially charged topics. They covered dismissive attitudes, colorblindness and microaggressions.

Microaggressions are commonplace interactions that either intentionally or unintentionally target a person or group. These include actions like touching a Black person’s hair or asking a foreign-looking person where they came from.

Jones told The Skanner News the community dialogue was meant to bring about self and group accountability as well as foster a sense of community.

“We are passing each other, all the time, on the street, we are each others' neighbors,” Jones said. “We interact as business people together, but we're not having an opportunity to really sit down and break down those barriers.”

The Stories of Our Neighborhood idea came out of a conversation between Jones and Portland Playhouse Director, Brian Weaver. The Playhouse mission is to create a place where people of all backgrounds could come together.

Beyond producing diverse plays with diverse casts, Weaver wanted to reach out the neighborhood itself. During the dialogue, he acknowledged the role of the arts as a gentrifying force in neighborhoods. The playhouse, which sits at the corner of Northeast 6th Avenue and Prescott Street, was once the home to Mt. Sinai Baptist Church, a Black church in the heart of the King neighborhood.

The most profound moments came when the audience members created a living timeline of the important events for their neighborhood. It began with the most recent events where White parents talked about sending their kids to formerly Black schools.

As the neighbors talked, the memories went back in time. They reminisced about hanging out at Geneva’s Cotton Club and having thriving businesses lining the streets of Killingsworth, Williams and Martin Luther King, Jr. Blvd. when it was known as Union Ave.

The Black neighbors expressed a loss in community that felt more personal than the loss of place or business. Many of the older neighbors said everyone knew everyone else and people would look out for each other. One woman in the group said that people don’t even say “hello” to each other anymore.

“I walk down Mississippi now, I don’t know who those people are,” she said “I miss my neighborhood.”

The conversation ended with an exercise to rebuild the community. The congregation was encouraged to write values on white boxes. People wrote values like economic fairness, access to art, gratitude, friendship and justice. The phrases “talk to me” and “say hello” appeared multiple times.

The boxes were then rebuilt into a city by members of the group, symbolically forming a new neighborhood from the dialogue.

Community member Bealeka Makau said she wished that the group could have talked more about the larger economic forces at play in gentrification and displacement. She also said she was worried that she would encounter a lot of resistance from the White people handling with racial issues.

“I came in with some trepidation that there would be more resistance to acknowledging how White privilege has contributed to the feelings of separation within this community -- and I found that people seemed more open and ready to have the conversation,” Makau said.