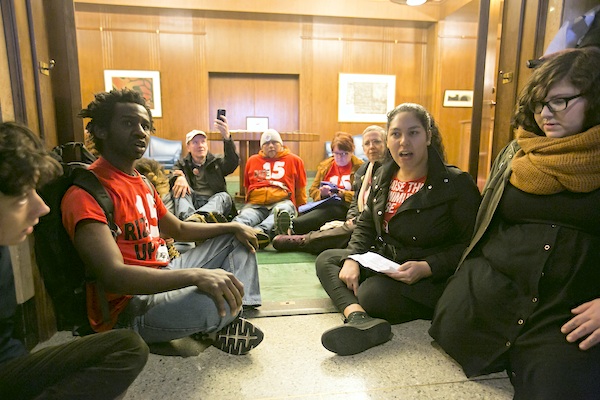 SALEM, Ore. (AP) — Oregon lawmakers have approved landmark legislation that propels the state's minimum wage for all workers to the highest rank in the U.S., and does so through an unparalleled tiered system based on geography.

The measure passed the state House on Thursday and is headed to Democratic Gov. Kate Brown, who said in a statement she will sign it.

The move makes Oregon a trailblazer in the broader debate about minimum wage unfolding nationwide as the federal threshold remains unchanged from Great Recession levels.

Fourteen other states have raised their rates over the past two years. Another dozen or so are considering taking up the issue this year, either through legislative action or ballot initiative, as issues of wage inequality and middle-class incomes have climbed to the forefront of presidential campaigns by Democratic candidates Bernie Sanders and Hilary Clinton.

Oregon's plan imposes a series of gradual increases over six years. By 2022, the state's current $9.25 an hour minimum — already one of the highest in the nation — would climb to $14.75 in metro Portland, $13.50 in smaller cities such as Salem and Eugene, and $12.50 in rural communities.

Those minimums dethrone Massachusetts — where the statewide rate will climb to $11 an hour next year — from the top spot, according to the Economic Policy Institute, a D.C.-based think tank that tracks wage laws across the nation.

The measure was crafted as a compromise between what unions, businesses and farmers want and as an attempt to thwart more aggressive proposals that could go before voters in November. Those two proposals call for a statewide minimum of $13.50 or $15, and would be phased in over half the time. Labor unions have not yet indicated whether they'll follow through with ballot initiatives.

Other states that have boosted statewide minimums above $10 include California and Vermont. That stands in stark contrast to more conservative states such as Idaho, which has blocked previous efforts to raise its minimum beyond the federal level, and Arizona, where lawmakers are considering a bill that would block state funding to municipalities that set a local minimum wage.

While there are varying approaches to raising the minimum wage, the three-tiered regional system is uniquely Oregon's.

States have targeted wage hikes for government employees or certain industries, as seen recently in New York for fast-food workers, while others allow local jurisdictions to set their own rates above the state threshold, prompting recent hikes in cities such as Seattle and Los Angeles.
Oregon, however, would be the first state without a one-size-fits-all statewide minimum.

"Oregon has always been at the forefront of new ideas in the country. We were the first to actually have a minimum wage," said Rep. Paul Holvey, a Democrat from Eugene. "Trust me, we're not solving all the problems, but we are making a substantial dent in it by pushing up from the bottom some wage equality ... from the huge disparity we have in incomes."

The state is deeply divided between west and east by economic, cultural and political differences. The goal of the tiered approach is to balance the needs of the more urban west — where living costs have soared in rapidly growing Portland — and struggling farming communities in the east.

Division over the minimum wage — currently at $7.25 in federal law — is also often split along party lines and pits low-wage workers against business groups, as has been seen in Oregon this year. Republicans, the minority party in the Oregon Statehouse, have opposed the increase.
Barry Bushue, president of the Oregon Farm Bureau, said Thursday's vote shows Democrats don't value family agriculture.

"This enormous increase will force many family farmers to try to find ways to mechanize or transition away from labor-intensive products Oregon is known for, like apples, pears, milk and berries," Bushue said. "Unfortunately, some will give up and sell, while others will simply go out of business."

"I think any time you create these sorts of somewhat arbitrary geographic districts, that's when you can create opportunities for some sort of economic disruption," he said.