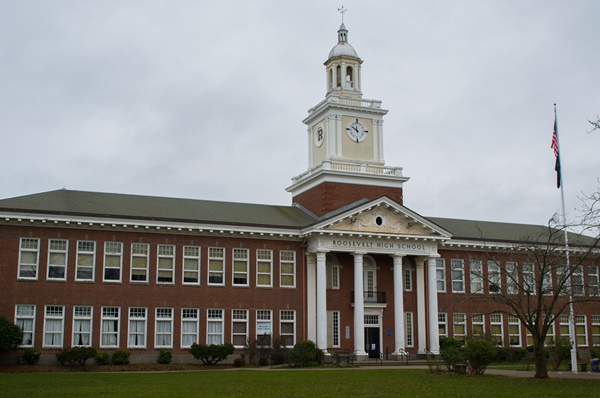 Parents are turning out by the hundreds at public hearings about air toxics in Southeast Portland.

But is that the whole story?

Both the Bullseye Glass and Uroboros Glass companies have stopped using the toxic substances cadmium and arsenic in response to recent reports of neighborhood pollution possibly linked to their operations.

But not only have those chemicals been tracked in Southeast Portland since at least 2009, but arsenic and chromium discharged into the air are among an array of cancer-causing poisons in the air that have been watched in North Portland for more than a decade without any meaningful action by state regulators.

Mary Peveto, founder of Neighbors for Clean Air, has studied these issues in depth — and agitated with the Oregon State Department of Environmental Quality — to come clean with local residents about what’s going on and do something about it.

“There are other concerning levels in other areas of the city that are more disproportionately representative of communities of color in North Portland,” Peveto says. “Is this really going to be a popularity contest for communities that can assert the most outrage?”

The Skanner interviewed Peveto about the bigger picture of air pollution and how it impacts Portland families.

The Skanner News: How long have you personally organized around Portland air pollution?

Mary Peveto: I first became alarmed about air toxics in Portland in 2009.  But that was only about my daughter’s school, Chapman Elementary.  I quickly learned that this wasn’t isolated to in my family’s neighborhood in Northwest Portland.

The same data used for the study published by USA TODAY in 2009 http://content.usatoday.com/news/nation/environment/smokestack/index was an analysis that a University of Massachusetts -Amherst research team had done that cross referenced Federal Toxic Release data (FTR), EPA’s Risk-Screening Environmental Indicators (RSEI), and more than 127,000 schools in America.  The big picture was equally alarming. While my school was one of 35 in the Portland metro area which ranked among the worst 5 percent in the nation, no Portland area school ranked better than the bottom 30 percent.

Harriet Tubman school specifically came onto my radar, as my daughter was a student there when it was the all girls leadership academy. So I was in the parent community when the EPA chose Tubman as one of 66 schools in 22 states to monitor the air in response to the USA Today report. The EPA found, among other things, high levels of cadmium.  http://www3.epa.gov/air/sat/HarrietTub.html

This was significant enough to be one of the few things mentioned in the USA Today story that followed EPA’s national monitoring effort.  http://usatoday30.usatoday.com/news/nation/environment/2009-03-01-epa_N.htm

I was already at the time a member of the Oregon DEQ’s Portland Air Toxics SOLUTIONS Advisory Committee (PATSAC). So I also knew that the state had consistently measured high levels of cadmium and arsenic at the air toxics monitoring site at North Roselawn (less than a mile from Tubman) since 2005.

The DEQ staff told the PATSAC that the agency could not explain where it was coming from, though they considered consulting a phone book for possible sources.  But they hadn’t even done that.

TSN: What kinds of reports are available about that?

MP: So much data…

You might ask DEQ to provide you with the ongoing data results of the monitor at North Roselawn.  I helped a women who lived very close to that site get that raw data, because her son was diagnosed with high arsenic exposure. They researched and eliminated the possibility of every source in his environment, testing soil (at home and school), water, foods, household items like rugs.

It was only when they saw the raw results from the DEQ monitor in North Portland that they could see that the levels in his blood (which for 18 months at least they were drawing every month from this 6-year-old boy) correlated with the levels found in the air. Same ups and downs.

This all started because he was diagnosed with neurological and behavior problems severe enough that the school he was attending asked the parents to withdraw him.

TSN: While state officials say they don't really know the source or what's going on, are there other metrics that have indicated the source?

TSN: Who is affected by this air pollution?

MP: We all are. But poor people and populations of color are affected more. And it isn’t just these metals. In fact Multnomah County has the 4th highest Diesel Particulate emissions of all counties in the nation. And we know that the risk of that is deadly.  And the students of Tubman, perched up above one of I-5’s biggest choke points, are at extreme risk.

We also know, thanks to Multnomah County Health (2014 Multnomah County Health report on Racial and Ethnic Disparities), that populations of color are exposed more to this most deadly pollution.  In fact African American communities are hit the worst, living predominantly in census tracts with three higher levels of Diesel PM than census tracts with higher or average White populations. Look at the report around page 28, where the county used diesel particulate exposure as a risk indicator for healthy environments.

TSN: Why has this happened?

MP: Why? Why?  I think you have to ask someone else, like regulators and the elected leaders who I have been asking for over six years the same question.

TSN: Over the years what has changed?

MP: The board of directors of my nonprofit Neighbors for Clean Air would say our work has changed things:

TSN: What else should Skanner readers know about this?

MP: It is critical that leaders don’t try to make this just a short-term, one-time fix to address a crisis in Southeast Portland.

First – there needs to be a huge shift to address the problem in North Portland in a community that too often has not had the risk addressed, and as far as I can tell from my analysis of the data, the only difference is in the makeup of the community.

There are huge barriers for underserved communities in understanding the risk and mobilizing the effective resources to address it.

Second – equally or more important – no small fixes. Our problem is not glass manufacturing and cadmium/arsenic in Portland. Our problem is a system that allows toxic pollution to put people at risk from all sources.  Diesel particulates kill more people in our state/city than traffic fatalities and homicides COMBINED. It also contributes to many of the chronic social determinants of health: asthma, respiratory problems and heart disease.  And all of those impact communities of color and poor communities more than anyone, and so far no one is talking about that in this current story.

TSN: Mary, what is the bottom line on what the Oregon Department of Environmental Quality should do for families?

Neighbors for Clean Air has a petition calling for action by the state DEQ on their website at www.whatsinourair.org.

The group is also organizing transportation for local families to a tentatively-scheduled hearing in Salem.