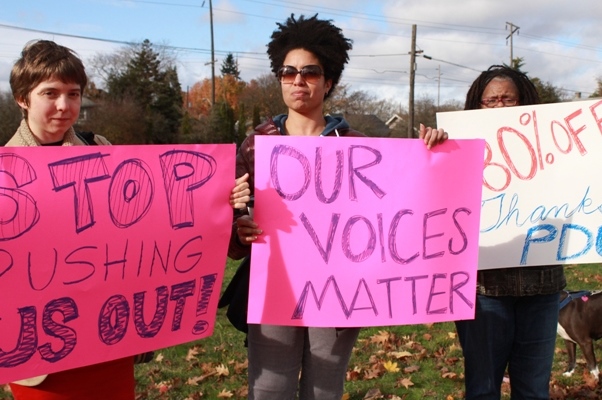 Distribution of government dollars often makes for a contentious debate. But the pledge of $20 million in Portland Development Commission funds for  affordable housing was one of the more talked about issues in 2014.

That move -- a response to concerns about affordable housing in the area -- led to the adoption of the North/Northeast Housing Strategy and an accompanying oversight committee charged with creating a plan of action for the funds.

Though the Portland City Council voted unanimously Jan. 28 to adopt the plan, which details how the dollars will be used in the next five years, members gave an official presentation of the document at city hall this past Wednesday.

Committee chair Bishop Steven Holt called the council’s adoption of the plan “a significant moment” in the history of Portland.

Some of these dollars have already been put to work in the form of home repairs throughout North and Northeast Portland, with the bulk of the grants being awarded to African American-owned households.

The biggest portion of the monies, $4.5 million, has been set aside for redeveloping land owned by Portland Housing Bureau between Northeast Martin Luther King Boulevard and Cook Street and Ivy for “family-friendly” affordable housing.

The number of homes created, and households assisted, is expected to total around 450.

To ensure that families most directly  affected by gentrification get first dibs on these new developments, the committee has included a “preference policy” that would track award dollars based on the amount of urban renewal activity that occurred where they lived.

“For example, if you are a family member, grandparent or parent or yourself, who appears on the list of homes that were taken by eminent domain or condemned by the city in order to do urban renewal actions in the past, that would be in a priority ranking,” committee member and PSU Professor Lisa Bates said on Wednesday.

The plan notes North and Northeast Portland were, just two decades ago, home to the highest concentration of African Americans in the city and state,  but does not address race outright.

Fritz called the preference policy “groundbreaking,”  but expressed concern over how families will be chosen. She noted the high number of people who have been displaced in the urban renewal area, which stretches from around the Lloyd Center area to the St. John’s neighborhood.

Bates agreed with Fritz, saying these funds were insufficient to return all families to the neighborhood, but that officials had yet to determine a system to regulate how families would be chosen. Fritz  suggested a lottery as a possible solution.

Virgie Ruiz, who attended schools throughout Northeast Portland and now works at Self Enhancement Inc., said she hopes that in returning families back to the area, they’ll be able to enjoy its new amenities, like improved schools. She also cites the recent historic turnarounds in graduation rates at Jefferson and Roosevelt High Schoosl as an example.

“I’m hoping by people returning to this inner city area, they’ll be able to do better and go to college, and get skills needed to be successful,” Ruiz said.

The committee is also in the early stages of creating a plan that would help introduce people into the neighborhoods given the drastic growth and changes they’ve seen over the year.

Also on the group’s agenda is developing a set of “best practices” that utilizes its TIF dollars to support economic growth among the returning populations. Though details  on the partnership were scant at the Feb. 3 meeting, Holt spoke of leveraging excess funds borrowing against future growth in property taxes in urban renewal districts to spur many more developments in the area. Raising property values in a process known as Tax Increment Financing is a part of the strategy that will occur over the next five years.