Will Farming be the Future of Food Justice? 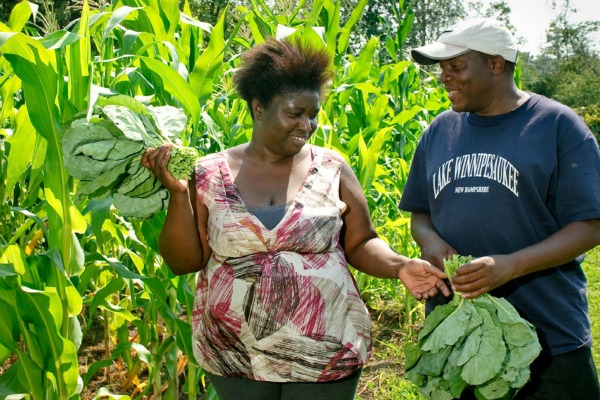 Conversations about African Americans and food often veer toward issues of diet, price and culture. The problem of getting low cost, healthy food to Black communities dominates the dialogue.

At a food justice workshop in January, organizer Edward Hill urged attendees to rethink the entire food system from seed to beyond the plate. The session, “Culture, Crops, Cash, Commerce: The Future of Food Justice,” proposed a new food network that specifically benefits African Americans.

Hill, the executive director of the non-profit organization Groundwork Portland, said food justice has to push beyond food access efforts.

“Food justice seeks to ensure the benefits and the risks of where and when and how food is grown, produced, transported, distributed, accessed… are eaten and shared fairly,” Hill said.

He went on to describe the current food system as a network of food businesses. These are farms, food processing plants, restaurants, distributors, farmer’s markets, grocery stores, consumers and waste management industries.

“Those are all industries. It’s all money. It’s probably half the world's economy right there in all of those associated opportunities,” Hill said.

But these opportunities aren’t distributed equally along race and gender lines. According to a 2011 report, “The Color of Food,” from the Applied Research Center, women and people of color are overrepresented in low-wage jobs in the food system, holding jobs such as food servers and factory workers in food processing plants. White men dominate the higher paying management and ownership roles in the food network.

For African Americans, the legacy of slavery and Jim Crow directly affects the present day food system. In the work session, Hill talked about the historical obstacles affecting Black farmers.

Hill said there were 100,000 Black farmers who were farming more than 15 million acres of land in 1900. By 1980, there were less than seven million acres farmed by Black hands. He said there was a historic flight from the South and farming, which was too closely associated with slavery and sharecropping.

Threats and violence prevented small independent Black farmers from keeping their land. A Black woman in the audience told Hill that her family left land they had owned because of a racist lynching.

“Black Americans did not want to farm --  not because of farming, but because of Jim Crow law. They were being lynched. My own father left Alabama, [where] we had land, to get away from lynching. His cousin was lynched on our property,” she said.

In 1982, a report from the United States Commission on Civil Rights, “The Decline of Black Farming in America,” predicted there would be no Black farmers by the year 2000. In the years between 1982 and 1987, more than one-third of the nation’s Black farmers went out of business.

Disenfranchised Black farmers were denied farm loans and assistance from the USDA or given smaller amounts and heavier restrictions than White farmers of a similar background.

Settled in 1999, almost $1 billion has been paid to 13,300 African American farmers and is the largest civil rights settlement to date. In 2010, Congress appropriated an additional $1.2 billion to settle another 70,000 claims of racial discrimination.

Hill sees a shift back towards Black farming. While African Americans are only two percent of all farmers, their numbers are steadily growing as the total number of farmers in the U.S. is decreasing.

During the work session, it was asked how Black farmers would improve food scarcity and access. Panelist Jamaal Green, who is finishing his Ph.D. in Urban Studies at Portland State University, said Black farmers would have insights into the needs of Black food consumers. He said the ability to have SNAP benefits accepted at farmer’s markets came out of food justice work.

The largest gains that come out of having more Black farmers would be the redistribution of wealth back into Black hands, according to Green.

“Land is a rather valuable asset, for people it is a way of building wealth. And a primary driver of the racial wealth gap, which is even greater than the racial wage gap, is the fact that Blacks have been locked out of property ownership or had their properties stolen over the course of 250 years,” Green said.