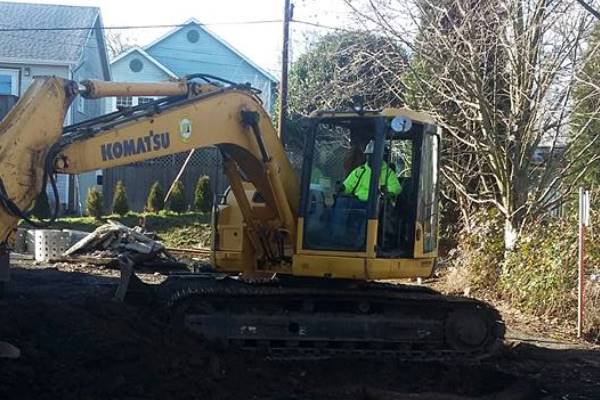 Crews have begun work on a historic property on Mississippi Avenue that, just months ago, was under the financial threat of closing its doors for good.

The Sons of Haiti St. Josephs Grand Lodge, located at the corner of North Mississippi Avenue and Fremont Street, is now partially in the clear after community members rallied to help the 63-year-old organization offset repair fees – in the amount of $50,700 -- the organization needed to meet current city codes.

“They told me to just sell the property, and cut my losses,” lodge grand master John Bryant wrote in a Facebook post earlier this month. “I did not listen.”

Instead, with help from the Boise Neighborhood Association, a community-led comedy fundraiser and a generous grant from the Portland Development Commission, the full amount has been raised.

But the saga is not over. The lodge still owes an additional $40,000 -- fines the lodge racked up during the last visit from a city inspector.

In the meantime, workers have already begun the remodel, which is expected to take about three months to complete.

In that time, the site will be excavated, re-gated and re-paved. Contractor will also update the wiring and water system for the building. The remodel will allow the lodge to host up to three more food carts on the site.

Stephen Gomez sits on the board for the Boise Neighborhood Association. He said after continued meetings with lodge members he found they had indeed made various attempts to get into compliance with code, but ultimately lacked the resources to do so.  Gomez offered his help, and re-established contact with the city and rallied neighbors and businesses alike to help.

“Really, the overall goal from my perspective – and, I think the reason why people have stepped up with private monies and I think certainly why the PDC has as well -- is that we want to stabilize one of the last Black-owned properties and organizations on the street,” Gomez said.

Once this projection is completed, Gomez told The Skanner, the neighborhood association and the lodge intend to meet with the city to have the fines reduced or waived completely.

Portland Development Commission’s Tory Campbell was instrumental in getting his agency’s help.

“This should be a normal rhythm for us as an agency to want to help,” Campbell said, adding that this project is a nod to the changes the neighborhood has undergone in recent decades. “I think it is incredibly important to acknowledge significance of this project. Beyond just doing normal good work, which is this being one of the last remaining Black-owned organizations and properties on that street which has been impacted quite dramatically by displacement and gentrification — it has a different weight to it.”

Lodge members aren’t the only ones who will benefit from the forthcoming upgrades.

Though the space – which is more than 3,000 square feet in size --  primarily functions as the meeting lodge for a historically African American faction of the Freemason fraternity, it’s also used as space for kids’ karate classes and Sunday church services.

In a more recent Facebook post, Bryant is seen handing over the first payment, a check for $10,000, to the lead contractor outside of the Sons of Haiti building.

“God is good,” Bryant wrote. “Today after running into many issues during the course of preparing the work site for excavation -- that included removing all food carts’ storage sheds -- with God’s help we got the job done excavation will start on schedule…thank you Jesus.”