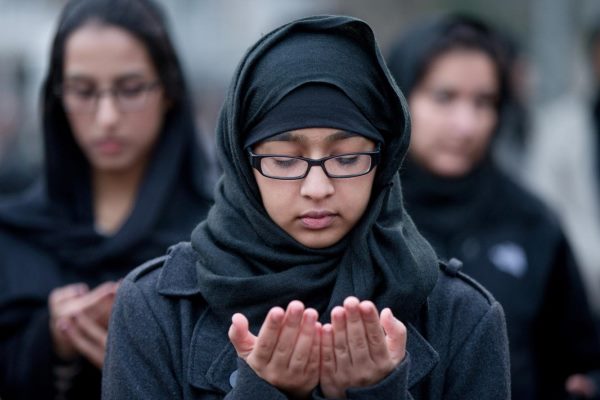 Islam is the world’s fastest growing religion, with more than 1.6 billion adherents worldwide, according to a Pew study released last year.

However, in the wake of extremist groups like ISIS carrying out violent acts in the name of the religion, there has been a revved up sense of fear towards Muslims locally and nationwide, including Republican Presidential candidate Donald Trump calling for a religious registry and local officials and a Dalles, Ore. city councilor’s anti-Muslim comments in November.

In response, Portland leaders have been engaged in a series of public forums focused on addressing this form of bigotry.

Earlier this month, a demonstration organized by the Center for Intercultural Organizing called “Stand for Love, Interrupt Hate,” drew hundreds to City Hall to memorialize victims of Islamophobia, homophobia, racism and other forms of bigotry.

Several speakers, one being Baher Buti, founder of the Iraq Society of Oregon addressed debates around Syrians seeking refuge in United States as their country finds itself embroiled in a bloody civil war.

“You can find Iraqi and Syrian professionals all over America,” Buti said, before claiming that since 2012 America has received less than 1 percent of refugees from Syria.

Mayor Charlie Hales, was also in attendance and offered an anecdote about students at Sunnyside Environmental School requesting to welcome Syrian families at the airport.

“They said, ‘I want to go to the airport, and greet those new families as they come to our city.’ That’s who we are,” Hales said. “When people say, ‘I’m your neighbor, I am your friend, I welcome you to my city,’ if you say that, they will feel and remember that and they will know who you are.”

According to a resolution passed by the Portland City Council in December “affirming its commitment to the Muslim community,” there are an estimated 20,000 practicing Muslims in the metro area right now.

“There has been an increase in anti-Muslim and anti-immigration rhetoric in the national media, with the intended outcome of increasing patriotism and loyalty through inciting fear and hatred,” the document reads, before calling recent demands to ban Muslims from entering the country ‘unsociable.’

Recently, Dallas, Ore., city councilor Micky Garus came under fire after for comments he made on social media about three Muslim men who’d been elected to public office in Detroit.

“I agree the majority of Muslims see freedom of religion as a precious value,” Garus said in the Nov. 10 Facebook post, “but historically when Muslims gain positions of power in government, the acceptance of traditions and practices such as Sharia Law become the norm. That is a diminution of individual rights, especially for women. You only need to look as far as Germany to see examples of women being mistreated by the recent predominantly male Muslim immigrants.” The post, which has not been deleted, drew scores of comments in support of his remarks, with comments.

Once a resident of Iraqi refugee camps, area resident, Hussein Al-Baiaty came to the United States back in the early 1990s as a child, not knowing a word of English. Today, Al-Baiaty is an entrepreneur, managing both a successful screenprinting and his own clothing line, Almaic. With “Almaic” -- a portmanteau of the words Aramaic, the language that gave birth to Arabic, and his last name -- he fuses his religion and his love of hip-hop.

“It is convenient for people to fear what is misunderstood,” Al-Baiaty said. “Sadly, the mainstream media is addicted to wars and protecting ‘our interests.’”

Al-Baiaty said he’s learned to pay little attention for the sake of his own peace, preferring instead to shed light on the contributions of Muslims globally through his art.

“Islam did so much for this world, and much of our society runs on these fundamentals today, yet no one realizes [this],” he said. I plan to change that through Almaic.”

Abdul Hafeedh bin’Abdullah grew up in the Christian faith, but converted to Islam later in life. Today, Abdullah works on a number of different initiatives through Multnomah County and the City of Portland -- including the Black Male Achievement program and STRYVE, all aimed at empowering youth.

Abdullah commended the city for passing its resolution, calling it “comforting.”

As an African American, he said, his experience with his faith has differed from others, even for reasons as seemingly trivial as his way of dress.

“I think Muslims [sometimes] find themselves a little more concerned about people who are bold about their dress code being more Islamic in a time when Islam is being perceived as something that is a threat to the world,” Abdullah said. “There’s lots of looks, mumblings, adverse treatment when it comes to [Muslims] all the time, but it’s a pretty unique thing because it’s primarily either because what you’re wearing, or what you say your name is. But someone can change their dress and be treated completely different.”

In terms of the real threats produced by extremist groups like Al-Qaeda and ISIS, Abdullah said they represent the ideals of more Westernized thinking than they do the religion itself.

“They use various things in their culture and belief systems within their communities to justify why it’s okay to kill someone’s children also killing their children. Islam teaches differently. So the fact that those people who choose to say that it’s okay to innocently murder human beings, and murder human beings as a means of combat are literally altering the teachings of Islam, but they’re doing so in response to a condition in which their women and children are being killed.”

According to the Huffington Post, as of Dec. 16 there had been at least 73 Islamophobia-related incidents in North America since the Nov. 13 tragedy in Paris.