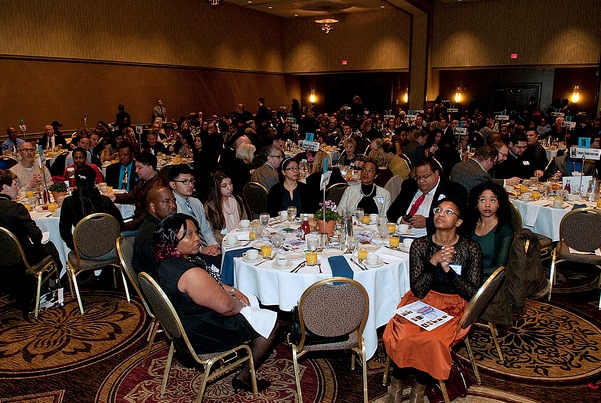 Charles Bonner learned in school that Abraham Lincoln freed the slaves – but what he saw growing up in Selma, Ala., told a different story.

Bonner said that, as a youth, he looked around and saw African Americans sharecropping in cotton fields for poverty wages. The moment when he noticed the difference between what he learned in school and what he saw around him constituted a “paradigm shift,” he said Monday morning. He became a nonviolent activist at the age of 16.

Here are some highlights.

Bonner said another paradigm shift came when an organizer from the Student Nonviolent Coordinating Committee came to Selma in 1963 and spoke to him and a friend to persuade them to get involved in fighting segregation.

All human beings originate in Africa, Bonner said. Drawing from King’s famous Christmas sermon, he said humans are made to live together – but rarely recognize that we are one.

“Basic Christian doctrine teaches that humans are made in the image and likeness of God,” he said. The star dust energy that created human beings is God, and we, too, are God. Human being have segregated themselves not just racially, but spiritually, isolating themselves and failing to recognize our connectedness.

“You and I are one. We know we are one.” Bonner’s speech at the Breakfast:

The Skanner Foundation’s 2016 Drum Major for Justice Award went to Eddie Rye, Jr. Rye, of Seattle. Rye was instrumental in renaming Seattle’s Empire Way to Martin Luther King, Jr. Way and in organizing the city’s first MLK celebration in 1983. The celebration Monday included a march of thousands from Garfield High school to the Federal Building in downtown Seattle.

A note from the publisher:

At The Skanner Foundation’s 2016 Martin Luther King, Jr. Day breakfast, we inadvertently read the names of two political candidates while calling the names of elected officials in attendance. This is not consistent with our policy, and we sincerely apologize to readers and those who attended the breakfast.

The reading of these candidates’ names should not be construed as an endorsement. The Skanner only endorses candidates through its editorial pages. We are very sorry for the error.

Publisher Bernie Foster takes full responsibility for this error. Please contact him with any issues or concerns.