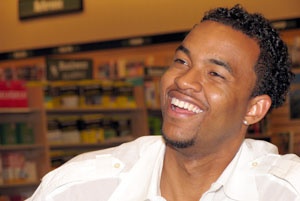 Seattle native Cecil Cross II knows a thing or two about the life-altering first semester of college. After all, the 24-year-old first-time author just graduated in 2004 from Clark Atlanta University in Atlanta, Ga.
The young writer and journalist was in town on Aug. 4 at Barnes & Noble University Village promoting his debut novel, "First Semester," a fictional coming-of-age story about life experiences during the first semester of college. The book was published by Kimani Tru, books for African American teens and youth
The story follows James 'J.D.' Dawson, a freshman from a rough inner-city neighborhood in Oakland who begins his first semester of college at the University of Atlanta. After enrolling in his first semester, J.D. is faced with some tough issues and must ultimately figure out how to deal with college life, new friends and relationships; and how to manage college courses, peer pressure and life-changing experiences.
Cross, 24, was born in Seattle, grew up in the Central District, and is a 2000 alumnus of Garfield High School. Upon graduating from Garfield, Cross went on to attend Clark Atlanta University in Atlanta, Ga. studying Mass Communications and received Student of the Year honors in 2004.
Upon his graduation that same year, Cross then had the opportunity to either go to the Seattle Times as a full-time paid reporter or to Vibe magazine for a 10-week unpaid internship. Cross chose Vibe magazine since he had recently began LOOK (Love of Our Kind) Magazine, a magazine for urban college students. He said the decision to learn the inner-workings of the magazine industry felt more beneficial to his future.
At the same time Cross was at Vibe, he was shopping his manuscript to over 30 of the nation's most prominent book agents and editors. The book was not an easy sell and he received quite a few rejection letters.
"People were interested but they felt the college demographic didn't have enough readers who would be interested in a book like mine," Cross said. "It was discouraging, but at the time I never gave up hope and was confident that "First Semester" was a book that could definitely be a best seller."
He then attended the Hip-Hop Summit with Russell Simmons in New York and was speaking with a guy about his book and had mentioned to him that he was looking for an agent. The man knew an agent named Regina Brooks with the Serendipity Agency and told Cross to give her a call. After calling, Cross met with Brooks at the Barnes & Noble Bookstore in Harlem, N.Y. She took him on as a client that very day. After about a year of negotiations with publisher Kimani Tru in 2005, it took another year to complete the editing process.
"I thought I was done in 2004 but that was only half the battle, it's been a very long time coming, but it's a very satisfying feeling," Cross said.
Cross began "First Semester" in 2002 and said it took about two years to complete the manuscript.
"My whole life people always told me your college years will be the best years of your life and in the middle of my college years I thought, 'they're right, because these four years can actually shape the rest of your entire life,'" Cross said. "The entire college experience inspired me to write it. Everything from standing in school registration lines to receiving a loan refund check and blowing it at the mall or club; eating Top-Ramen since we didn't have enough money for food; and partying.
"There are so many stories from my experiences in college, to something funny or something dramatic, I just had to write about some of those stories," Cross said. "The last time I recall that there was a story that was a realistic depiction of college life was 'School Daze,' and that was in the 80s, so I figured it was about time for a remix."
Since recently quiting his job as a journalist at the Atlanta-Constitution Journal where he worked for five years, Cross is now working as a full-time author on his new book, a follow-up to "First Semester" called "Next Semester" and a screenplay for "First Semester" he hopes to turn into a movie with some big name celebrities and also a relationship book.
Cross has written for Vibe, Slam, XXL, Complex and Upscale magazine and appeared on CNN last year as a guest panelist at the National Association of Black Journalists convention, speaking about "Entrepreneurship in Journalism."
Cross deals with some serious life issues in the book such as alcoholism, drug abuse, self-esteem and AIDS/HIV.
"Those are all real-life situations and I think that although 'First Semester' is a fiction novel, it's based on non-fictional events and realistic challenges and circumstances," Cross said. "While I wanted to create the comical read, something that people could laugh at and joke about, at the same time college students face very real issues when they're in college.
"This is the first time for a lot of kids they have freedom; they don't have a curfew; a lot of people take that freedom for granted and make decisions that can alter the rest of their lives."
While HIV hasn't personally affected Cross, his family or anyone he knows, he talked about the rising AIDS/HIV epidemic and about how it's the number one killer of Blacks between the ages of 18-28, and while African Americans make up less than 10 percent of the population, over 50 percent of all new HIV cases are African Americans.
"For me to write a novel about college life and not include it I wouldn't think I was telling the entire story and so while it's not everyone's college experience, I wanted to include that because it's very important for people to protect themselves because HIV affects everyone, the entire community," Cross said. "You'll never get a second first semester."
"First Semester"(Kimani Tru, $9.99)  is available online and in bookstores nationwide.