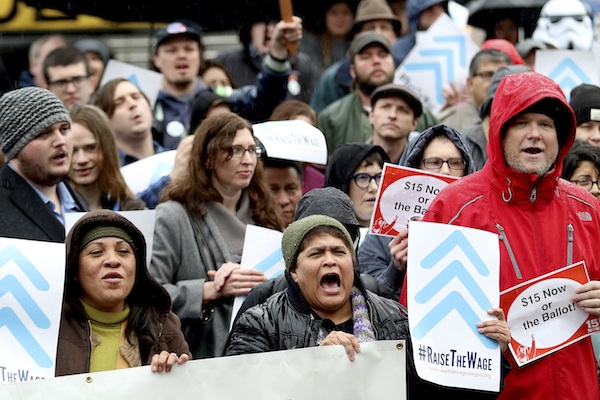 But there's discord over how large the increases should be, when they should be implemented, and whether minimum wages in Oregon's largest metropolitan area with strong economies should be higher than in rural areas that are struggling.

Gov. Kate Brown this week proposed what she called a compromise, but her proposal has so far failed to end bickering. Unless Oregon lawmakers can find a way to appease stakeholders during the legislative session beginning next month, voters may well decide the matter with two ballot measures proposed for November. 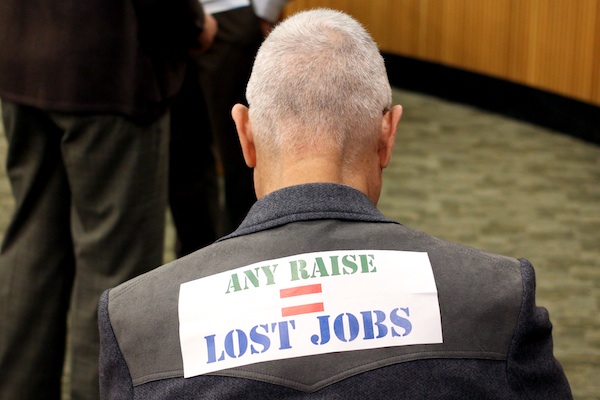 An audience member wears a sticker on his back opposing wage increases during a public hearing on proposals to raise the minimum wage at the Oregon Capitol Building in Salem on Thursday, Jan. 14, 2016. In an effort to stave off two potential ballot measures this fall and put to rest months of aggressive debate with a compromise, Gov. Kate Brown on Thursday proposed a phased, two-tiered hike to the state minimum wage that has the support of the legislature's top two officials. (Gordon Friedman/Statesman-Journal via AP)

Passions are running high over the issue. Lawmakers held the first round of public hearings Thursday at the Capitol in Salem. Community leaders, businesses owners and residents from all over the state came to tell how the proposals would impact them.

A look at the dispute, the players and possible outcomes.

THE PROPOSALS: A BREAKDOWN

__"Oregonians for 15" initiative: The coalition proposes raising the statewide minimum to $15 an hour by 2019. The increase would take place in gradual, annual phases starting in 2017.

__"Raise The Wage" initiative: The coalition wants a $13.50 an hour statewide minimum by 2018, with annual increases also starting next year. Additionally, it would allow local jurisdictions to set their own thresholds above the statewide minimum by removing a pre-emption law.

Under each proposal, wages would be adjusted for inflation after reaching their perspective thresholds, which is the current practice under state law.

WHAT STARTED THE DEBATE?

Raising the minimum wage has been a national discussion as the economy has recovered from the 2008 financial crisis, the federal minimum remains stagnant and debate around the growing gap between rich and poor has taken center stage. Wage hikes took effect in 14 states Jan. 1, knocking Oregon's minimum from second-highest in the nation to eighth.

In Oregon, the issue largely stems from explosive growth in metro Portland. The city has experienced rapid population growth over the last several years, causing real estate prices to skyrocket and the overall cost of living to jump 8 percent from 2011 to 2014, according to some estimates. By contrast, the rest of the state is mostly rural, lower-income and hasn't seen the growth or cost increases occurring in urban Portland. That divide between the urban and rural areas was largely why Oregon lawmakers failed to solve the minimum wage debate last year. That's when two coalitions backed by labor groups decided to take the issue to voters through ballot initiative in 2016.

But political leaders, small businesses and farmers from the state's rural areas say a comparable wage increase to Portland would impose substantial hardship on their fragile communities and put many out of business or work entirely. Brown's proposal this week aims to find common ground between the labor groups, businesses and rural parts of the state.

House Speaker Tina Kotek and Senate President Peter Courtney indicated that they'll do whatever it takes to make sure a wage increase bill is passed this session. They declined to say how much their fellow Democrats, who control both chambers, support Brown's proposal, but lawmakers would much prefer solving it at the legislative level rather than at the ballot. But the coalitions behind the ballot measures haven't said for sure what their next step will be, and they've indicated they might still go to voters if they're unhappy with the Legislature's solution.