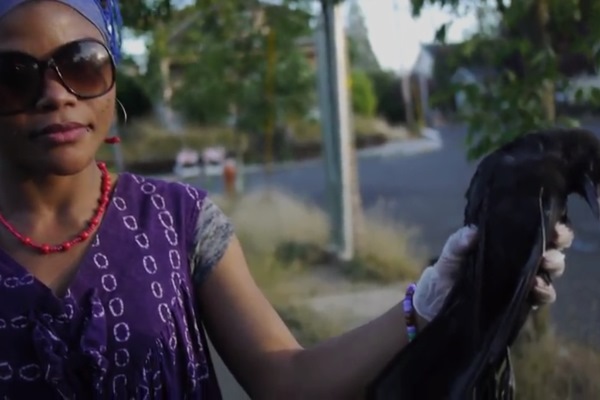 Portlander Kalimah Abioto describes herself as a filmmaker, writer, and transmedia artist. Her latest work is a series of video portraits lasting no longer than 30 seconds, dedicated to exploring the bounds of Black beauty.

The Skanner spoke with Abioto to discuss the origins of her latest project, which she started working on this summer in New York. This interview has been edited for space and clarity.

The Skanner News: What is the Ace Book?

Kalimah Abioto: The Ace Book is a series of video portraits of people. It’s just been a way for me to connect with people and share ideas about life, about beauty, about fashion, the way people express themselves visually. Film is my background and film is a big part of how I express myself and that being a way to express what’s unconscious, as opposed to what’s always consciously felt. And it’s a way of documenting what may be not always seen.

TSN: This didn’t start in Portland, did it?

KA: It started at Afropunk [an annual arts festival] in New York, but I didn’t go there with that intent. I started doing videos with people, almost like a mini-documentary with video portraits of people. Generally they range from 30 seconds to eight seconds. And in it, I feel like so much can be described about the person, about a situation, a story.

It’s interesting, because I’m still developing it. It’s not -- and maybe this is how experimental film works -- you’re developing something, you’re not always sure where it’s going to go.

TSN: Tell me more about the girl with the dead crow [in the video – see photo].

KA: That’s what made me realize [I should do] short documentaries. Of course it was the day of the shooting in South Carolina, and I had gone to an event at Bethel A.M.E. and I had seen her during the service and she looked really interesting. And, then afterwards, she was walking ahead of me, and I saw her pick something up. Then I saw that it was a crow. Then I was like, “What are you doing with that crow in your hand?” And she was like, “Well, I feel like every time I see a dead animal, I need to make preparations for it, I need to bury it, I need to cover it with a cloth.” And she was from, she might have said, the Ivory Coast. And so that just really struck me right there, that she felt she needed to take care of these dead animals. And somehow to me that connected with what was happening, like that we need to take care of each other.  Not just on this plane, but in another plane -- in doing these things, we are connected to each other. No matter the distance, no matter what dimension we are on, it matters. Her story just touched me.

Sometimes it’s just about reaching out to people. I think that’s why I started doing the videos anyway, was to reach out to people, to just make connections with people. To know what they’re feeling, to know what they’re doing and share that with other people. [The woman with the crow is] a really interesting woman. She’s a drummer, and she was also saying different things about forgiveness. I know a lot of people that are still angry about that shooting, and the guy who did it -- but she was saying we still need to forgive and all these other things. It was just interesting.

TSN: Do you feel like you’ve had any realizations about Black beauty as you’ve been doing this?

KA: Realizations -- not really. I already knew it was vast, I already knew it was wide. You always have to remind yourself of it. Sometimes that’s hard to do geographically, but sometimes you have to fight for it. Which is what’s happening here [in Portland], people are galvanizing around the idea that you have to fight for this community -- which isn’t quite just yet apparent across the U.S. But because it’s been so heightened here, because people have been so moved from their communities, [people] realize it’s extreme, it can get extreme. We do have to fight for our communities because we’re beautiful, we’re a beautiful people—so varied. It just reminded me of our beauty, and that’s what I wanted to capture.