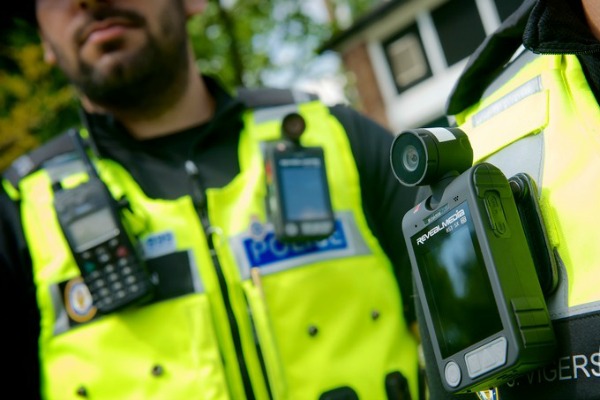 Portland Police held its final forum this year to discuss the possibility of using body cameras.

The 200-seat event hall at Portland Community College’s Cascade Campus was left mostly empty as a crowd far below capacity joined the officers for the discussion. Lt. Eric Schober said low turnout has been the norm at the bureau’s forums on body cameras.

Schober, who co-hosted the event with Capt. John Scruggs, said the forums have been in an effort to get community input into how the bureau may use cameras. House Bill 2571 which passed the Oregon Legislature in May, requires police departments that adopt body cameras to follow certain standards.

At the center of the discussion was privacy. Participants discussed when it is and isn’t appropriate for officers to tape as well as the subsequent rules of access to the film.

“When we talk about body-worn cameras, a lot of people think -- and I did too -- that it’s a simple device. It should be obvious you turn it on and you start recording,” Schoder said. “But when we start looking at these separate instances, where you record and all of a sudden it gets really complicated.”

In Portland, adopting cameras is expected to cost around close to a million dollars, and around $5,000 to maintain annually, police say. Mayor Charlie Hales, who serves as police commissioner, has earmarked money for in the city’s budget Scruggs said.

In cases where no crime has been committed, footage will be deleted within 30 days, according to police. However, if the video is considered evidence, police can store it up for two years. In instances where a death is involved, videos will be stored forever.

While going through a list of agencies that will likely have access to body cameras video, factions mentioned included, patrol officers, transit, gang enforcement, special emergency reaction team, and others.

One agency not mentioned was the recently reinstated Joint Terrorism Task Force, which has two Portland Police officers assigned to work directly with the FBI full time to combat terrorism both locally and nationally.

When asked by The Skanner about the Joint Terrorism Task Force’s access to body cam videos, Schober said, “Just like everything else we do over the years, we share information and evidence with each other.”

A joint poll conducted by the Washington Post and ABC News this year found the majority of Americans favor police use of body cameras.

It’s been a growing conversation in the past year, one that’s gained significant steam since the events surrounding 18-year-old Mike Brown’s death at the hands of a since-retired Ferguson, Mo. police officer last year created a surge in the Black Lives Matter movement.

In the months following the non-indictment of Brown’s killer, Darren Wilson, the Obama administration announced a project that would fund 50,000 body cameras to be distributed to police bureaus throughout the U.S. in an effort to curb what the president had previously called “a simmering distrust that exists between too many police departments and too many communities of color.”

In a talk posted online by the Ford Foundation in December, Michelle Alexander, author of The New Jim Crow, offered opposition to body cameras, calling them “another form of surveillance for poor people and communities of color.”

“I can’t believe honestly, that law enforcement hadn’t come up with this on their own a long time ago,” Alexander said. “I remember back when I was at the ACLU, we were working hard against a [police database] where they were fanning out in neighborhoods taking down the names, and addresses of basically every young man of color in California.”

Data released by the Portland Police Bureau in 2012 showed that despite making up only a fraction of the city’s population, African Americans are more likely to be stopped by officers than Whites, yet less likely to have committed a crime.

This year all four shootings involving Portland Police have involved White males. However, records maintained by the  watchdog group, Portland Copwatch, that date back to the late 1980s, show disproportionate use of deadly force against African Americans.

Nationally there have been more than 1,000 fatal officer-involved shootings. Many have been ruled  justified.