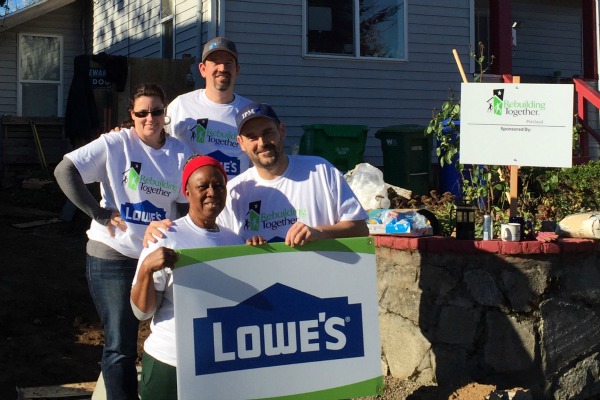 Liberian refugee Moima Doe was struggling to maintain her aging house in Northeast Portland. After her husband died five years ago, necessary repairs -- such as detached gutters and broken electrical outlets -- were being neglected.

As Doe grew older, the staircases were harder to manage as her knees began to falter.

She needed help to stay in her home.

Doe said she had to walk on floors that were falling apart underneath her feet.

“My bedroom was breaking down. There was a hollow floor there,” Doe said.

She received aid through the organization Rebuilding Together Portland, which partnered with Lowe’s to provide $15,000 worth of home repair materials and appliances. The organization applied and was awarded a competitive grant from Lowe’s, only 30 were granted throughout the country.

“Our goal is a safe and healthy home for everybody,” Malone said.

Malone was inspired by Doe’s story. Doe left Liberia with her husband and three children in 1985 to escape human rights abuses, political unrest and a brutal civil war that killed more than 200,000 people.

She and her husband purchased their home in 1994 and was a stay at home mother raising their kids. Life became more difficult after the loss of her husband, who provided their income and who maintained and repaired the house.

The Rebuilding Together crew put new gates in her backyard. The previous gates were broken and Doe was having theft issues. They also did electrical upgrades because all of the electronics were plugged into the last working outlet in the house. Malone said this was a huge fire hazard that needed to be addressed.

Six volunteer carpenters built a ramp from the house to the newly paved driveway so Doe could get to her house without using the stairs. The accessibility ramp had to be built in the back of the house. Doe now uses it as her primary way to get in and out of her house.

“They made a ramp for me to go outside back, I can go to the back and then come to the front,” she said.

When Malone and the volunteers were looking at Doe’s bedroom, the hollow floor nearly broke underneath them.

“While we were in the bedroom, we just about fell through the floor... right where she gets into bed,” he said. The crew put in a new floor, subfloor and carpet.

Dow said she was very happy with the new floor and carpet in her bedroom as well as the new vinyl flooring installed in her bathroom. She said the volunteers even cleaned the bathroom and kitchen at the same time as the carpentry work.

All of the work was done by skilled volunteers with Rebuilding Together. Malone said he tries to get all of the work done on one day, but in Doe’s case they had to come back a second time to install a new stove.

Through the work Doe was able to get rid of over 20 year’s accumulation of household goods. She moved back into a house that was safer, less cluttered and easier to move around in.

Malone said Doe takes care of her grandchildren who spend much of their time at the house. Doe said the grandkids like new improvements as well.

“If Grandma is happy, then they are going to be happy,” Malone said.