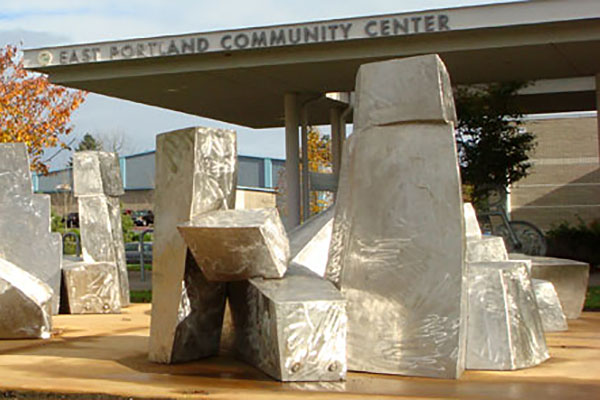 As Portland explodes in population and popularity, it is also becoming increasingly unaffordable for many of its residents.

Along the city’s outermost edges, the East Portland Action Plan  group is fighting to protect some of Portland’s most vulnerable populations from being displaced.

“There is no excuse to allow Portland’s most vulnerable community members, families, and businesses to be eradicated from Portland,” Lore Wintergreen, a planning advocate for the East Portland Action Plan, wrote in a media release sent out last week. “East Portland has been the place Portlanders were displaced to. Now people are being driven out of East Portland. This is unacceptable, it is shameful.”

The group, made entirely of citizen volunteers, held a press conference Monday to present research they’d conducted over the course of the past years, which they say points to early signs of gentrification in area neighborhoods.

Last week Wintergreen told The Skanner that when she became a volunteer for her neighborhood organization, the warning signs were already there.

“There were property owners that I spoke with that were already doing what we call the first stage of displacement, which is disinvestment,” Wintergreen told the The Skanner. “You already had property owners, both commercial and residential, basically saying they were not putting any money into their properties because they were going to wait for the tipping point -- to either sell them to developers or to develop them for a higher income bracket.”

Recommendations put forth by the coalition would require local hiring of women and minorities by contractors and developers, living wage provisions, targeted business assistant, and an act requiring banks and hospitals to have to reinvest in communities within three to five miles of each facility among other suggestions.

City leaders from the fair housing bureau held a series of listening sessions just a few months prior to the East Portland Action Plan’s release, in which they outlined research of their own that also pointed to early signs of gentrification most prominently along 82nd Avenue and 122nd Avenue.

As part of the four key goals outlined in Comprehensive Plan, a document which serves as the framework for how city leadership will develop the land over next 20 years, is to slow the pace and scale of East Portland’s growth.

The Bureau of Planning and Sustainability says there is recognition that the area has been underdeveloped in the years since it was annexed into the city in the early 1980s.

“There’s a recognition that there’s an inequity there,” said Planning and Sustainability spokesperson Eden Dabbs. “We have been using an equity lens. How can we address the lack of amenities, access, connectivity in East Portland, and we should do that at the same time we’re making other investments, if not more so? That’s the thinking behind some other land-use policies.”

Rents in East County have also been some of the lowest in the metropolitan area for many years now, and the area has seen an influx of African Americans and Latinos.

According to U.S. Census data, since the year 2000, Black populations had more than doubled in 25 of the 32 tracts in East County, while the White populations fell in many of those areas.

According to a recent article in the Willammette Week some East Portland neighborhoods most at risk of gentrification -- like Montavilla, Lents-Foster and Parkrose-Argay --  have seen increases upwards of 15 percent in the past year alone for the average two-bedroom apartment.

“When working with African Youth and Community Organization they told me they were moving their [clients] down to Salem and Wilsonville. Now we’re hearing people aren’t finding housing in Rockwood and Gresham and Fairview,” Wintergreen said.

Now she hopes with a renewed call-to-action, community and government leaders alike will heed to the sense of urgency, she say  that  is needed to make East Portland a thriving area for all residents, new and old.