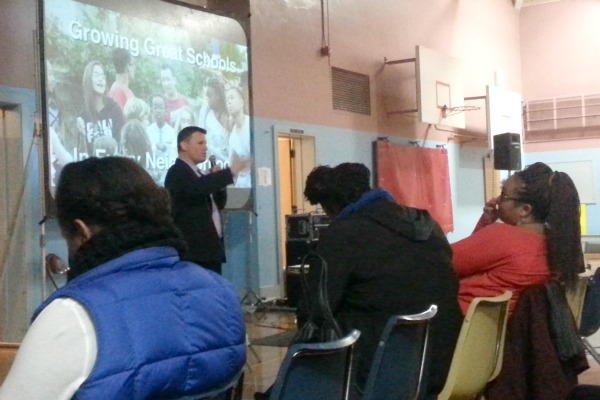 Concerned parents packed the gym at King School in Northeast Portland for the last public meeting on the proposed boundary changes for Portland Public Schools.

The futures of many local schools may change as PPS looks at decisions that will shift boundaries and switch some kindergarten through eighth grade schools into elementary and middle schools.

With so many big changes being considered, local 5th grade teacher Nichole Watson was concerned that Black voices were not being heard. After attending a meeting of mostly White parents at Roseway Heights, Watson said she was disgusted by classist and racist statements from people who didn’t want to change their schools.

After that meeting, Watson made it her intent to have Black voices heard at the King School meeting.

“I didn't want a repeat of that Wednesday night meeting. I think it’s really easy to talk that kind of truth when there is only people who look like you in the room,” Watson said. “My goal was to invite as many Black voices as I could and to sit in the front.”

At the King School meeting, a diverse crowd of parents, teachers and administrators showed up to weigh in on the changes. People in the crowd held up blue fliers that stated “We Heart Equity.”

At the center of the discussion are two scenarios proposed by PPS to deal with a predicted influx of students to the Portland area. It is estimated that there will be one million people living in Portland by 2040 and that PPS expect 5,000 more students in the district in the next decade.

PPS faces the challenges of over-enrollment in some schools, under-enrollment in others and school facilities that are too small. The proposed scenarios remix K-8 schools into K-5 schools and middle schools.

PPS Enrollment Director Judy Brennan presented a slideshow about enrollment balancing. According to the slideshow, new students would mean more funding which could stabilize core education in schools that are currently under-enrolled.

One of the frequently voiced concerns by people at the King meeting was that the two scenarios set up hostility between neighborhoods and schools.

Parents from Irvington, Laurelhurst, Beverly Cleary and Cesar Chavez expressed their desire to keep their current K-8 schools intact. These parents applauded the mentorship in K-8 schools between older students and younger students. They also raised concerns about children crossing large streets to go to the new schools.

Parents from less affluent schools neither defended K-8 nor praised K-5 school types, but used the forum as an opportunity to talk about the challenges their schools face.

Nicole Iroz-Elardo, the vice president of the Scott School Parent Teachers Association in Northeast Portland, told the crowd about life at an underperforming school. The school has an immersion program for Spanish-speaking students, but no budget for official PPS translations of materials for parents.

Iroz-Elardo said the parents of Scott learned Spanish to translate for other parents who can’t speak English. They also run a clothing bank for students who don’t have enough clothes, and have a computer room for parents who have no access to the internet. She asked if her experience was the common to Portland Public Schools.

“Do other teachers collect cans with mid-level students to pay for their field trips? Do other building administrators prohibit library books from going home because they cannot cover the loss?” Iroz-Elardo said.

Equity is a stated value of the boundary review advisory committee. The committee had been working for a year developing the proposed scenarios. At the King meeting, many parents of color asked where equity was reflected in the plans.

Shardé Nabors, former student and now parent in the Jefferson cluster of schools said there were over 2,300 failed students from her schools since 2006.

“Historically, our children have been neglected, disrupted, failed, overlooked and sapped of the very few resources they have,” Nabors said.

She decried the fighting between communities over the two scenarios and urged the community to rally together as a whole to speak up for better education of all students.

“We are not enemies. I ask that you advocate for adequate core and elective programming across the board. I ask that as you fight to hold on to your programs at your school, you fight to put programs into ours,” Nabors said as the audience applauded loudly. “Every child in our city deserves equitable access to opportunity.”