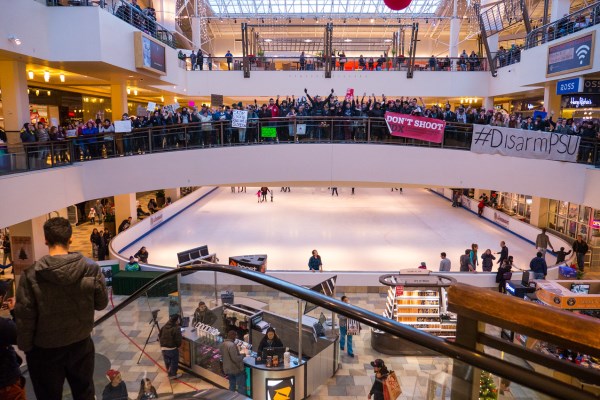 The rally -- dubbed “Black Lives Matter, Not Black Friday” -- saw a diverse crowd of hundreds gather at adjacent Holladay Park. Afterward they took to the streets and then entered the mall itself.

Teressa Raiford, lead organizer for Don’t Shoot Portland, who helped put the protest together, said organizers intentionally chose Black Friday as a rally day for the second year in a row. The idea was to highlight links between consumerism, capitalism and the deaths of African Americans.

The Portland Police Bureau sent a media advisory out Nov. 25 detailing their plans for several events scheduled for Black Friday, including the demonstration.

“As with all demonstrations and marches, the Police Bureau's goal is to ensure a safe, secure and orderly event for community members and to minimize disruptions to traffic,” the release said. “There is no specific information or concerns about the threat of violence, but the Portland Police Bureau will respond as it does with any large-scale event and have a number of officers in the area.”

Officer John Hurlman, a 24-year veteran of the Portland police force, was reassigned to an off-street job the day of the protest after he posted about the protest using his personal Twitter account.

Assistant Chief Donna Henderson said the since-deleted post is being reviewed by the Professional Standards Division.

During the first part of the protest, organizers read the names of Black Americans slain, mostly at the hands of officers of the law. Afterward the crowd took to the streets, interrupting traffic throughout the Lloyd District.

PPB officers, including some from the Gang Enforcement Team, trailed the group on bicycles and squad cars as they made their exodus from Holladay Park into the streets of Portland.

As the assembly moved, apparently en route to the Broadway Bridge, it was re-routed by the Portland Police north onto Northeast Martin Luther King Blvd., where the crowd marched for about 10 minutes, and curving back around towards the bridge.

The group was then met by an increased number of police officers -- about 20 of whom were decked out in riot gear with batons in hand -- blocking the protestors’ entrance onto the crossing. 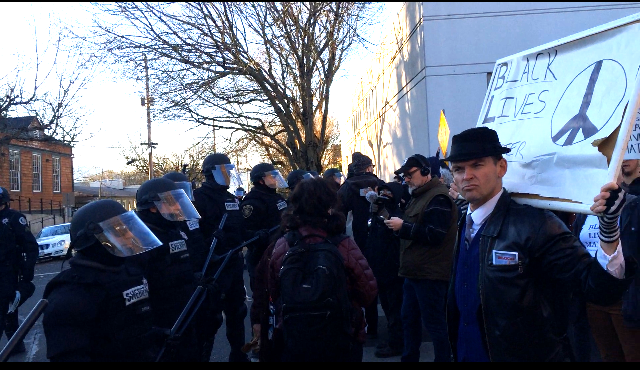 Demonstators standoff with Portland Police officers armed with batons and other weapons, blocking the group's attempt to cross the Broadway bridge. --Photo by Donovan M. Smith

After a standoff lasting nearly 15 minutes, the precession headed back toward Lloyd Center, this time entering the mall. Protesters draped resistance banners inside the mall and chanted while shoppers looked on.

The Skanner spoke to Lauren, who opted not to give her last name, as protestors streamed past her North Portland home where she was outside raking leaves.

She said she empathized with the sentiment that “Black Lives Matter,” especially in light of new information released about the killing of teenager LaQuan McDonald by the Chicago Police Department. But she hoped for a different slogan.

“I wish they were saying, ‘All lives matter’,” Lauren said. “I think discrimination happens to many people, so I think that’s what it should be.”

The protest in Portland was just one of many that transpired across the country Nov. 27, urging potential consumers against spending with large corporations for the day.

Major cities across the nation -- including Chicago, Seattle, Philadelphia and New York City -- saw people engaging in actions to disrupt one of the biggest shopping days of the year.

Coincidentally, Florida teen Jordan Davis was killed on Black Friday in 2012. On Nov. 23 of that year, Michael Dunn -- a White man who was sentenced to life without parole for Davis’ killing last year -- got angry that Davis and his friends were playing their music too loud in the parking lot of a gas station and opened fire.

The Guardian reports that Davis’ mother is one of many participating in “Not One Dime” initiative this year. The campaign aims to curb African American spending during the days between Nov. 27 and Nov. 30 to demonstrate the community’s collective purchasing power.

Consumer analysts reported Monday morning that Black Friday sales were down more than a billion dollars this year.

According to retail researcher ShopperTrack, sales at brick-and-mortar stores plummeted from $11.6 billion in 2014 to $10.4 billion this year.