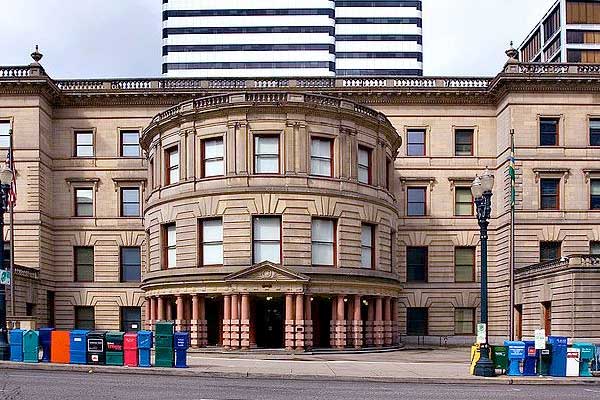 UPDATE: Nov. 25, City Council unanimously passed the ordinance, which will go into law starting July 1, 2016. Read the full text to the resolution here. OregonLive has a story with more info on the law's passage.

The fight for tougher Ban the Box protections continued in a City Hall hearing last Wednesday.

Advocates from a number of different organizations testified in front of City Council Nov. 18 in favor of local leadership adopting a new city ordinance that would require prospective employers to wait until a conditional job offer is extended before inquiring into their criminal background.

From there, employers must determine if any offenses on the candidate’s record are relevant to the job. Should they decide to terminate their offer, they must explain why in a series of written documents.

The Bureau of Labor and Industries will oversee and enforce the new law if it is adopted.

“The best way to end the cycle of imprisonment is a job,” Mayor Charlie Hales said as he opened up the floor for comment. Hales, now in his last year of office, has been a vocal supporter of the ban-the-box movement in the past year. “What we’re proposing here is an intentional and persistent breaking down of barriers.

This summer, Gov. Kate Brown signed a measure into law that will remove the question of criminal histories from job applications.

However, the state law, which goes into effect Jan. 1, still leaves employers with the option to inquire about criminal histories during interviews.

Commissioner Dan Saltzman had a number of questions regarding the ordinance, including what would happen in the event of a potential hire voluntarily divulging information about a criminal past.

City Deputy Attorney Judy Prosper, offered some explanation to the inquiry -- likening such a disclosure to knowing if a candidate is pregnant, disabled or of a particular race or ethnicity.

“This is a similar thing. Sometimes we know things that we are not allowed to use in our decision-making process,” Prosper said. “The employer is already sophisticated enough to know that they can’t not hire them for that reason.”

Commissioner Nick Fish, a former employment lawyer, raised concerns that while employers may not ask about criminal history, those who have done time in prison may have large gaps in their employment records -- raising potential red flags in the hiring process.

As a result of the hearing, the ordinance was altered slightly. The Bureau of Labor and Industry would oversee the enforcement of the law rather than the Attorney General’s office.

Urban League of Portland president and CEO Nkenge Harmon Johnson talked about Portland having what is effectively a more intense version of the state law, by pointing to the racial disparities in the criminal justice system.

She says 80 percent of Oregon’s small Black population lives in Portland, yet are six times more likely than Whites locally to be imprisoned.

“Portland is indeed the hub of Oregon’s communities of color -- and as such, you as elected officials representing Portland, have the greatest responsibility to address those unemployment numbers for Black Portlanders and others,” Harmon Johnson said before rhetorically asking why the law should be passed. “Because we know the playing field is not level for people of color.”

Unemployment among African Americans is about 10 percent higher than the state average with about one of five of Black Oregonians out of work -- according to data found in the State of Black Oregon report released by the Urban League this year.

Rep. Lew Frederick (D-N/NE Portland),who recently declared his candidacy for the state Senate, offered his support of the law too.

“We are I hope starting to turn the corner on what’s happening in criminal justice -- to where we are not just trying to punish, but re-integrating people into our community,” Frederick said.

City Council will do a second-reading of the ordinance at its next hearing Nov. 25, in which there will be a possible vote on its adoption into law.