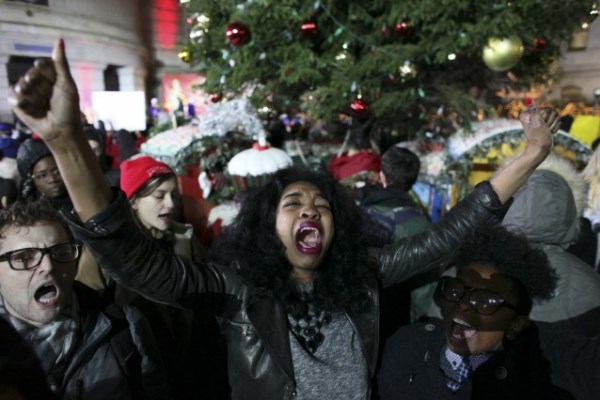 One of the most successful moments in the storied Civil Rights movement was the Montgomery Bus Boycott, emerging in the aftermath of Rosa Parks’ refusal to give her seat on the bus to a White man.

The protest saw throngs of African Americans sacrificing together in the name of justice. Some organized carpools, some simply walked, and some Black taxi drivers even offered reduced cab fare in support of the protest that demanded de-segregation of the city’s public buses.

Despite persistent attempts by the city of Montgomery, its residents and even the federal government after more than a year to stop the protest, they would prevail. On Dec. 20, 1956 protesters would claim victory with the city finally passing an ordinance to end segregation on its transit lines.

That was one of six marching orders Farrakhan put forth to Black Americans during the gathering in the nation’s capital on Oct. 10 to commemorate the 20th anniversary of the historic Million Man March this year, titled “Justice or Else!”

“Up with Jesus, down with Santa!” the 82-year-old leader said to the hundreds of thousands gathered at the National Mall last month.

Citing a study titled “The Buying Power of Black America,” by Target Market News, the Minister shared that Blacks have a collective buying power of over one trillion dollars annually, but spend close to $30 billion of that money on clothes, and more than $6 billion on tobacco and alcohol.

Farrakhan says the buying power of Black America must be harnessed more productively in order to combat the many disparities in their communities, and that a collective reframe from excessive spending this Christmas season is a beginning of that.

The Skanner spoke with some Portlanders who made the over 2,800  mile trek to D.C. last month to see if and how they will be implementing Farrakhan’s call for a Christmas boycott this year.

Native Portlander John Slaughter tells The Skanner he is on board with the Minister’s call-to-action.

“We need to show that our dollar means something. For me that’s part of the effort to make sure that we are trying to make a change,” Slaughter said.

Adding that withdrawing spending isn’t enough, Slaughter said African Americans, especially in Portland, must do a better job at communicating to each other about Black-owned businesses where they can spend their money.

“You don’t have to buy your kid 20 Christmas gifts. Buy them two. Don’t tell them it came from the anti-Christ, or a White guy who doesn’t work, tell him it came from Mommy and Daddy. Tell them they’re not getting as many gifts this year because you are sacrificing for the greater good of our people,” Slaughter said.

Ahjamu Umi, head of the All-African Peoples Revolutionary Party of Oregon, said after attending the first march in 1995, he was again impressed this year at Farrakhan’s work against capitalism and continues the organization of Black people in Portland.

“I respect him because I respect organization. Farrakhan and the Nation of Islam have twice organized over a million Africans to come together. Positive spirit and energy. No violence, and a desire for action.  That's what 60 years of organization gets you,” Umi said.

Anti-violence group Don’t Shoot Portland has organized a march to raise awareness for people to hold onto their pocketbooks this holiday season. The march titled ‘#BlackLivesMatter, not Black Friday,’ is scheduled for Fri., Nov. 27, and begins 1 p.m at Holladay Park.