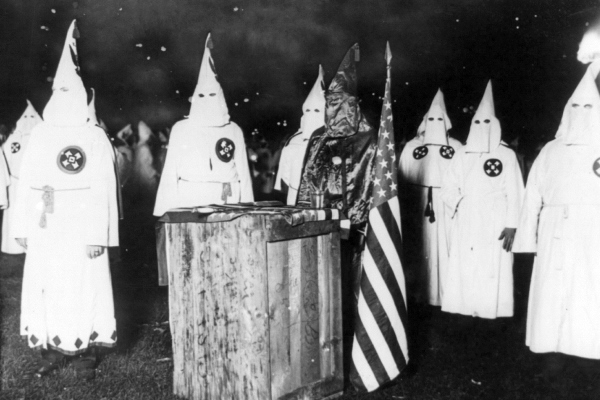 Recruitment flyers for the White hate group first began popping in Gresham neighborhoods earlier this month, before similar ones began appearing in West Linn and Oregon City, Molalla and most recently Silverton.

Thus far, no one has claimed responsibility for the flyers, and area police departments are saying their flyering is protected by the First Amendment.

“It’s been kind of unfortunate, having all these out, and having media call about it, because we don’t want to give them a platform,” Oregon City Police Department spokeswoman Sgt. Cynthia Gates told The Skanner. “I’d rather just make it quiet, make it go away, and not give them the attention they’re hoping to get from this.”

On Nov. 12 rumors circulated rapidly on social media sites that the KKK was holding a rally, in full regalia, outside of the Nike Factory Store located on Northeast Martin Luther King Boulevard in Portland.

“KKK members are at the Nike Outlet Store on MLK,” Portland resident Israel Fin wrote on Facebook in a post that was shared close to 60 times. “Find a buddy to wait at your bus stop, walk you to your car, stay where you are at if that is an area of town you have to walk/bike/bus through and can't be in a car.”

Rumors later spread to say that the Klan had headed away from the store, toward downtown.

Portland Police Bureau spokesperson Sgt. Pete Simpson, say outside of hearsay, no evidence of the Klan being in either part of town when we spoke to him the following day, adding that no photos of their activity had surfaced either.

A reporter from The Skanner drove by the area at about 7 p.m. and did not see anything out of the ordinary, and an Oregon Public Broadcasting reporter’s call to police and staff at the Nike store also turned up no leads.

“No information was put through to the sergeants, dispatch, or me and I didn’t see anybody on social media Tweeting any photos that verified it, which to me would amplify it,” he said.

No recruitment flyers have been reported as appearing in Portland.

Chandler says documentation of Klan activity can be hard to track given that they are a secret society, but estimates that at their peak popularity had around 35,000 members in the state in the 1920s.

“Don’t fool yourself -- Portland may be a liberal city, but there is support right here for the KKK,” Chandler said, adding that the group enjoyed a lot of political power across the state with members in the police department and elected positions as well.

Though he says he’s unsure of the validity of the group’s recent purported activity, he says, groups with similar ideologies have always operated here.

“It’s not just the KKK. [They’re] just the most visible and charismatic manifestation of [White hate groups]. What’s really dangerous is other groups, that are considered mainstream, like the American Legion, have worked for exactly the same purposes.”

One example is that of Mulugeta Seraw, a 28-year-old Ethiopian American man was was beaten to death with a baseball bat and the steel toe boots of two men in inner Southeast Portland Nov. 13, 1988.

After a seven-year trial, Ken “Death” Mieske, Kyle Brewster, and Steve Strasser -- members of White supremacist groups known as East Side White Pride and White Aryan Resistance -- were convicted in Seraw’s murder and ordered to pay $12.5 million in damages, bankrupting their respective chapters.

Today, the Ku Klux Klan is not listed by the Southern Poverty Law Center as an active hate group in Oregon. However the bulk of those they have identified as hate groups with an active presence in Oregon are White supremacist organizations.

Data released by the FBI shows the majority of the 66 reported hate crimes in Oregon in 2013, most were race- or ethnicity-based.

Organizers have announced a rally for racial justice from 1:30 to 2:15 Nov. 22 at Lents Farmers Market, Crossroads Plaza, SE 92nd Ave & Foster Road. The rally will include discussion of Oregon’s history with the KKK. Later on Sunday, Black Lives Matter Portland will hold a vigil for Tamir Rice at SE 11th and Madison.