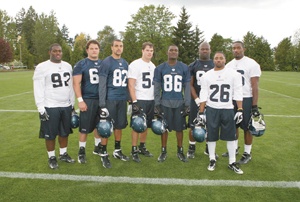 After a disappointing 9-7 season last year, the Seattle Seahawks opened their 32nd annual training camp Sunday with a few new faces they hope will help get them back to the Super Bowl. The three-time NFC West Champions hope to capture a fourth title this year.
The players now practice twice a day, this time at team headquarters in Kirkland; the Seahawks have abandoned their training camp in Cheney in Eastern Washington where they held their previous camps.
Injuries last year left the Seahawks' offense in turmoil with Pro Bowl quarterback Matt Hasselbeck's sprained right knee that caused him to miss four games. He also played with two cracked bones in his hand, and MVP running back Shaun Alexander was sidelined for six games after cracking a left bone in his foot, causing him to fail to rush for more than 1,000 yards for the first time since his rookie season. Hasselbeck also had off-season surgery on his left shoulder.
"Really, we're just starting over, even me," Hasselbeck said. "Whatever we did last year or the year before, it really doesn't matter."
"We have to stick to the program and try to get better, even at little things," Hasselbeck continued. "Whether it's giving a guy a chance to catch the ball a little bit better, at an angle that the ball comes in. We have meeting after meeting about these things. I have a notebook full of things Jim Zorn wants me to work on. There is a long list of stuff."
Coach Mike Holmgren is positive about Hasselbeck's recovery.
"Matt is the leader of this team and he is a really good quarterback. I trust that he will be able to stay healthy this year. That is the big key," Holmgren said.
The offense line needs to show significant improvement this season. With wide receiver Darrell Jackson being traded to the division rival San Francisco 49ers, receiver Deion Branch will move over to flanker and D.J. Hackett will see more playing time and a chance to start at split end, although Holmgren hasn't given him the starting title yet.
After losing All-Pro Steve Hutchinson in free agency last season, the young left guard Rob Sims has to step up, as well as center Chris Spencer, who struggled last season and has become the full-time replacement for retired center Robbie Tobeck.
"You go from a chatterbox like Tobeck who never shut up to someone who is naturally quiet like Chris Spencer and he has to learn to be vocal even though naturally that is not who he is. He has to do that, so we're working hard on that, and he is getting better at it," Holmgren said.
The defense also gave up too many big plays last year and Holmgren hopes to minimize those with the addition of safeties Brian Russell and Deon Grant, whose roles will be interchangeable, and second-round draft pick Josh Wilson as nickel back.
After practice, Wilson talked about "reacting" versus "thinking" at the corner position. "I'm not thinking, 'What do I do?' 'What do I have in this coverage?' 'What do I do this play and that play?'" Wilson said. "Now I know what I do and I can focus on what the receiver is doing and be able to react more. I'll be able to react faster and get my hands on more balls."
With the addition of defensive end and former Atlanta Falcon Patrick Kerney, one of three free agents signed this season, the Seahawks hope the defense will become faster and more aggressive.
"There is a great standard here, which I like," Kerney said. "I want to contribute to that and see if I can raise it a little bit. I expect great things from myself. I expect to win my one-on-ones. I expect to hold my gap in the run every time and there can't be any higher expectations than that."
Holmgren said he's excited about seeing more of Kerney after he came into mini-camp hurt.
"You're anxious to see him play but then you have to be careful you don't play him too soon," he said. "He cares about football and works very hard. He is an effort-intense player. … He has good pass rush skills and we expect him to get to the quarterback a fair amount."
"He knows how to play the game and with such intensity, that's always good," Holmgren added. "I am hopeful that our defense really gets going and cranks it up this year. We have a great defense."