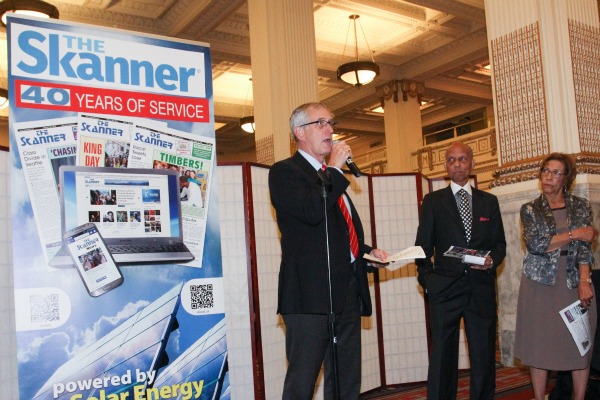 Champagne flutes were held high in a gold and maroon-bedecked room. Glasses clinked against each other as politicians, community organizers and loyal readers toasted The Skanner News.

This publication hosted a champagne toast to celebrate 40 years of serving the Portland community and the greater Northwest. From the very first editorial, published Oct. 7, 1975, The Skanner News set out to shake up the status quo, hold the establishment accountable and become a community resource for its readers.

Portland Mayor Charlie Hales delivered a short address to the packed audience. He said in many ways, the objective of The Skanner is as true today as it was in 1975. Hales said he appreciated the paper’s push against inequality and calls for City Hall to make Portland a city of opportunity for all.

“The role of The Skanner in speaking truth to power is always needed,” Hales said.

Scroll through the slideshow below for photos from the event:

Grace Stratton, a field representative for Sen. Ron Wyden delivered a Congressional record on behalf of the senator. The document is an official record of the proceedings of the United States Congress which informs President Obama of The Skanner’s 40th anniversary. To view the Congressional record, click here.

Copies of the recently published 40th anniversary commemorative edition were laid out on tables for guests to thumb through. The edition chronicled local community leaders, businesses and events that touched the community over the last 40 decades, through photos and reflective editorials penned by former The Skanner editors, Helen Silvis and Lisa Loving.

Attendees said the record of the paper helped them see the story of Black Portland in a larger context. Community organizer Lakeitha Elliott said the written history in the paper was exciting.

“It's a place where I can go for the history before I was born and from when I was young. I can look back and see stuff from when I was a kid and remember those things that I might not have remembered and be able to see them in print and understand the history,” Elliott said.

Elliott is planning on keeping a copy of the special edition and other older The Skanner newspapers to share with her daughter in the future.

Charles McGee, president of The Black Parent Initiative, said the paper has a pivotal role within the community helping new residents understand Portland’s relationship with the Black Community. McGee mentioned reading The Skanner with his wife, who isn’t native to Portland.

Oakland, Calif., transplant Chris Fuzelll said the paper has been integral in informing him on his quest to learn more about the history of African Americans in both the city of Portland and the state of Oregon, respectively.

Cindi Fischer, who has done work as a mental health advocate up and down the Northwest, commended The Skanner for spreading the voice of African Americans not just to other African Americans, but to the wider community as well.

“We’re a part of them, and they’re apart of us,” Fischer said. “We’re the canary in the coal mine. To have an independent voice for African Americans [in the media] is essential to our survival, and our ability to move into thriving as a people in our community.”

The mood of the evening was excited and jubilant, with many community members reveling in both the past and expressing their hopes for the future. McGee said he dove into the 40th anniversary edition and he looks forward to reading the next 40 years.

“It’s phenomenal. It’s just amazing, honestly and 40 more years of The Skanner newspaper is going to be amazing,” he said.