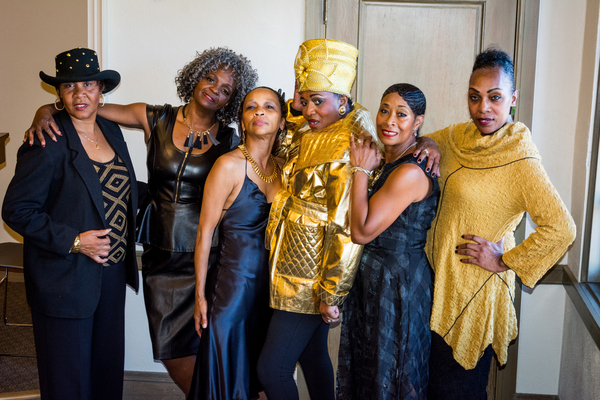 At the end of September, the top floor of North Portland library was transformed into a runway for a group of seasoned African American models as they strutted for what photographer Bruce Forster said was a crowd of about 50.

With live music playing, food and an appearance by the “Mayor of Northeast Portland,” Paul Knauls, Forster chalks the day up as a success.

“I’m at a loss of words on how to describe it,” Forster said. “They had great attitude.  They all just loved to sashay, and the music was really just perfect to help them parade around.”

In June, The Skanner News published a feature on Forster’s photo shoot with the models, which took place in 1975. Forster hadn’t collected the women’s names and put out a call to the community to help identify and reunite them.

With readers’ help, almost all the women were identified within a matter of weeks. However, not all were able to participate in the Sept. 27 show at the library.

Most of the women Forster captured in black and white in 1975 are in their 60s now, though some have passed away. Others have moved out of state, and a few could not be located.

Forster said prints of the few who hadn’t been found were placed on a table in the hope that someone may recognize them.

The women who remain in Portland -- Debbie Hicks, Patsy Andrews, Rosa Bletson-Washington and Sue Chiles -- took to the runway with style and confidence.

“It was as if we had not missed a beat. The girls were on cue, and we didn’t even have a rehearsal,” Hicks said.

According to Hicks, all of the women from the Forster’s original shoot were a part of a now-defunct Northeast Portland-based modeling troupe called the “Golden Girls.”

“We ate together, we did these shows all over the state of Oregon -- on the coast, up in the mountains, here in the neighborhood, so we pretty much got a chance to know each other and each other’s moves,” Hicks said. “[The reunion show] proved that nobody’s lost anything.”

Hicks said when she heard people were looking to find them this past summer she was both surprised and elated.

“Most of us weren’t looking to be big-time models,” she said. “We were just having fun, and pursuing a sort-of-kind-of dream here in Portland. If we made something of it, that was great. If we didn’t, that was great. We just wanted to give back to the neighborhood.”

Today Hicks said she has no ambition to walk the runway, only to act as a resource for young women who are considering a career path in modeling.

“I don’t know if our babies understand what true beauty is anymore, and how important it is for them to actually love themselves. If I could interest just a handful of girls in what it really means to be successful I’d really be satisfied,” Hicks said.

Several other women, who weren’t a part of Forster’s original shoots back in 1975, also joined the runway, rounding the Sunday afternoon celebration. All the models were styled by Yollanda Nins-Johnson.

“The overall thing was the joy of being together and the joy of being back together,” Forster said. “It was just so much fun to hear them getting ready and putting on their makeup, and just jiving with each other. It just got a lot of spirits up,” he said.