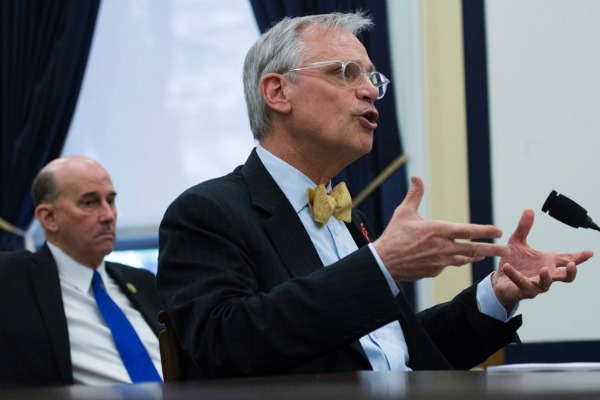 Blumenauer said Hillary Clinton appears to have the best chance of winning the election, “but it’s fluid.” The rise of Bernie Sanders’ campaign – as well as Donald Trump’s controversial rise in a crowded field of Republican candidates – has been “catnip” for the media, but it’s hard to say how things will land.

“There’s kind of an undercurrent here. People are frustrated,” Blumenauer said of Sanders’ campaign. He likened Sanders’ ascent to the election of Jeremy Corbyn, originally regarded as a far-left fringe candidate, to the leadership of Britain’s Labour Party.

He described Clinton as a solid senator and secretary of state, and someone who is smart, engaged and well-prepared for the presidency – but is concerned she hasn’t found her voice as a candidate.

As for his own work in Congress, Blumenauer said he’s pushing for an increase in the gas tax, deeper investment in infrastructure and criminal justice reform, and improving health care access for veterans.

“This is the first time in over 50 years we don’t have a major federal transportation project in the pipeline,” Blumenauer said. He wants to raise the gas tax to allow investment in transportation infrastructure that’s multi-state and multi-modal, as well as improving existing infrastructure.

Such projects would help create middle-wage jobs, he said, noting most recent job growth has either been high-salary jobs or low-income service work, with middle-class jobs continuing to shrink.

Blumenauer has long been a vocal champion for drug policy reform, and is pushing for reforms to both drug policy and criminal justice system, particularly in communities of color.

Since last year’s protests in Ferguson, Mo., following the killing of an unarmed Black teenager by police, Blumenauer said more policymakers and members of the public are aware of “grotesque disparities in criminal justice.” He feels conversations around criminal justice and race are changing.

Nationwide, he noted, African American youth are still four times more likely to be arrested for marijuana, though surveys on youth drug use show they are no more likely to use it. Arrest numbers are still twice as high, he said, “even in enlightened Oregon.”

He hopes to see more minority participation in the legal cannabis industry, and has begun work introducing legislation to make it easier to expunge marijuana offenses.

“There are people who are now in jail for things that are going to be legal,” he said.

He’s also pushing to make sure the industry is fairly taxed and has access to banking services. Right now banks won’t do business with marijuana-related businesses since the drug is still federally illegal, though the Obama administration has said it will not interfere in jurisdictions where voters have made it legal for recreational use.

Blumenauer has also been a supporter of implementing Ban the Box laws at a federal level, which prohibits employers from requiring that job applicants disclose their criminal history upfront.

Asked why the Koch Brothers are pushing for some criminal justice reforms, he said, “I know a lot of genuinely conservative people who think sentences are too long.” Not only does it tie up inmates’ lives but the taxpayer foots the bill for extended sentences – including health care for aging inmates.

Blumenauer is concerned that funding for the Veterans Administration hasn’t scaled up in proportion to the number of troops sent to Iraq and Afghanistan in the last decade and a half, resulting in an epidemic of suicides among veterans, necessitating an increase in mental health funding for vets, as well as a need for housing.

“We make it harder than it should be [to return from combat],” he said. “We need to help veterans reintegrate into the community.”