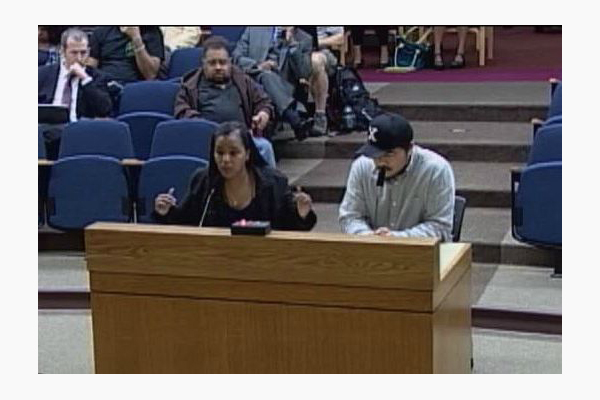 Local Don’t Shoot PDX activist Teressa Raiford approached the Portland Public School Board meeting with a story to tell -- the life and death of Andre Dupree Payton, her nephew.

Nearly five years ago, on September 26, 2010, Payton was shot on the corner of NW 2nd and Couch at 2 a.m. Raiford said he died in the same year that he graduated, making him another young man whose graduation pictures were used for his funeral.

She said Payton had been enrolled in culturally competent education since he was seven years old, but his education didn’t address his lived experience.

“These children aren't getting to 21 years old and they are coming through this system. This is a system, that I would think… would be competent enough to help those that have the biggest disadvantages,” she said.

Raiford and fellow Don’t Shoot PDX member Maria De Silva asked the PPS board to be more accountable to their most vulnerable students. They challenged PPS’s equity programs, calling these efforts a failure for Black students.

“We need strong oversight of our programs and spending because we are not getting the results we need for our kids,” De Silva told the board.

In 2014, the Oregon Department of Education fined PPS for disciplining Black special education students at a higher rate than other students. In response, PPS was ordered to spend 15 percent of its funding from the Individuals with Disabilities Education Act to reduce discriminatory discipline.

According to PPS, in July of 2014, Superintendent Carole Smith set goals to reduce the number of exclusionary discipline incidents for Black, Hispanic, Native American and Pacific Islander students. These incidents of suspension and expulsion had occurred at a higher rate for these underserved students.

In a presentation to the Portland City Council, PPS said the number of students excluded has been dropping since 2007, but Black students still experience the largest rate of expulsions. The report named key strategies to reduce expulsion disparities such as culturally responsive teaching and restorative justice conflict resolution.

De Silva told the board that the drop in exclusionary discipline for Black students over the last year is due to principals being pressured into making their numbers look good.

“A PPS principal came out to us, confidentially, and said principals are being directed to achieve the superintendent’s equity goal, but are not given any guidance, support or tools to achieve these goals,” De Silva said. “They are told they cannot provide SpEd services to Black kids, they cannot suspend or expel Black kids - no matter what.”

The Don’t Shoot PDX activists asked the board to freeze all outside spending until the equity audit was completed. PPS Board member Mike Rosen told Raiford and De Silva that outside contracts had already been negotiated and would be paid.

Rosen, who chairs the auditing board for PPS agreed that equity programs should be assessed.

“One of the things we are talking about … is performance measures, so that we understand the return on the investment for the dollars we are spending,” Rosen said.

The meeting of Raiford and De Silva with PPS was a challenge to demonstrate the effectiveness of equity programs. Raiford also asked the board listen to grassroots leaders of the community, such as herself.

She said appointed equity directors couldn’t speak for children growing up in foster situations, families that have been affected by the criminal justice system, or parents whose children have been killed.

“If you are not knocking on our doors and speaking to us directly, you are not talking to anybody that has any kind of opportunity to speak on our behalf,” Raiford said. “We are not happy with the numbers that are coming out of this district as it pertains to the successful outcomes for our children.”