In Need of Wheels 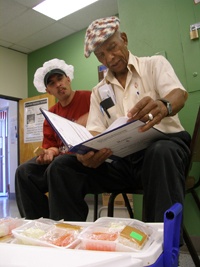 Longtime Meals on Wheels delivery volunteer Travis Sangle looks over the day's meal deliveries as his assistant Brent Shird, a volunteer for nearly 10 years, looks on. The MLK Jr. Loaves & Fishes Center is currently in need of volunteers for their Meals on Wheels program.

Loaves & Fishes Centers are casting for volunteers, the backbone of their mission to deliver meals to N/NE resident. From preparing the food, making sure the coffee is made and delivering Meals on Wheels, the senior centers would crumble without them. And that help is much needed at the Martin Luther King Jr. location where every week 75 meals lack the volunteers needed to deliver them.
Last Friday morning, center manager David Lomax, wearing an apron, busily tends to the morning's duties of organizing volunteers, meals and the other details that go into a successful day at his center, located at 5325 N.E. Martin Luther King Jr. Blvd.
"With inflation, and the high cost of gas, seniors are having a hard time," he said.
And so is the center's Meals on Wheels program. Although volunteer drivers can receive 40 cents per mile, Lomax said the high cost of gas prevents many people from helping the nonprofit from delivering the meals to homebound seniors. During the week, current volunteers and staff members are taking on extra duties to make sure seniors and other homebound individuals receive at least one hot meal a day.
Until recently, Lomax said many volunteers didn't accept the per-mile compensation. But with gas hovering at around $3 a gallon, volunteers are finding it harder to fill the tank on their own.
"We've come close to exhausting that fund," said Lomax, who says he's tried to come up with a few innovative ways to raise funds. Although it's merely a dream right now, Lomax wants to expand their in-house lunch program to sell meals to the non-senior public, in part by incorporating his "made from scratch" meals into the menu. And because the organization receives more than a third of its funding through community donations, Loaves and Fishes representatives have been attending more public events to raise awareness of the need in the community.
"We provide a service that enables people to stay in their homes longer," he said, before having to move to assisted living facilities.
The center will be holding an authentic Creole Jambalaya Dinner from noon to 5 p.m. on Saturday, Aug. 11 at the MLK Jr. location. To help raise money for the center, tickets are $10 for adults and $7 for children. The meal will be prepared by Teletha Benjamin, who uses her mother's own New Orleans-style recipe.

For nearly 20 years, 84-year-old Travis Sangle has done everything to keep from being sedentary. For five days a week, the lively and energetic man, with his signature hand-woven caps, delivers meals for Loaves and Fishes.
On this particular Friday, Sangle, who knows the names of every one of his recipients by heart, is having difficulty with the way a new volunteer has labeled the meals.
"I can't read this chicken scratch," he says, holding up the meal. Instead of a last name, the bag is marked with a first name and initial. Sangle knows most of the meal recipients by their last name.
"Sometimes my volunteers get a little reckless," he says, smiling.
Driving from house to house in his own car, Sangle now has another volunteer run most of the meals up to the homes, saving his knees from the hundreds of steps he would have had to climb. But he still makes a point to hand-deliver many meals to the seniors he has known throughout the years.
"The number one thing about this job is helping people," he says. "That's where your Christianity begins. I get just as much a kick out of delivering the meals as they do to receive them."
Without Sangle's visit, many of these people would not see a smiling face all day. They might also have household problems go undetected. Sangle says he used to have a few recipients who would allow him to come inside their homes, where he'd make sure things were ok — that the milk in the refrigerator wasn't out of date and that no hazards were evident in the home.
"You have to know people real well to be able to do that," he says. Some of those seniors – who were Sangle's friends, neighbors and fellow church members – are no longer receiving meals. Sangle looks at many houses in the Northeast neighborhood and reflects on times past.
"We used to have that house right there," he said, pointing to an aging home near Alberta Street. "There are a lot of people we used to have. Most of them have either gotten sick or passed away."
Back at the center, where more mobile seniors gather to eat together in the large dining hall, volunteer Roderick Johnson said he started volunteering after he saw how many seniors in his mother's nursing home didn't have guests.
"When they say 'thank you,' you can see how sincere they are," he said. "I can't put it into words (the feeling it gives me)."
Johnson has been volunteering in the center's kitchen for one day a week for a month now and says it concerns him to see so many seniors without family assistance.
"It's sad how our society has neglected our elderly and disabled," said Johnson, who lost the use of his right arm when he was 6 years old. "I didn't realize what a tough time they had."
Lomax says the demand on the center's services will only increase with the passage of time. As baby boomers age, those willing and able will have to step up and help, he says. Many in the community don't realize the need, he says. After all, when someone's a shut-in, people don't realize they're there.
"In fact, I didn't realize the need (before joining Loaves & Fishes)," he says.
Anyone interested in the many volunteering opportunities for Loaves & Fishes can call 503-988-6239 or visit their Web site at www.loavesandfishesonline.org.