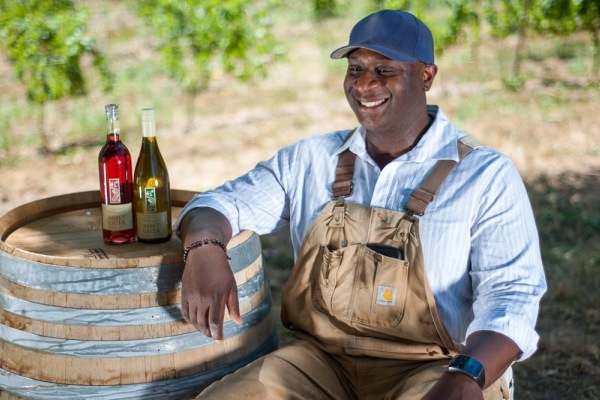 It wasn’t until the death of his father in 2007, Bertony Faustin said, that he realized that his job as an anesthesia technician wasn’t truly fulfilling him.

In his grief, Faustin took a step back, analyzed his life, and made a decision that would see him making history as well as a career change.

Now, at 43-years-old, Faustin is Oregon’s first Black winemaker. He’s also producing a documentary that aims to highlight the voices of other under-represented groups in his industry.

The film, titled Red, White and Black, aims to share the stories of people of color and LGBT people in the industry ‑- which has for many years been perceived as the domain of wealthy White men.

He said the barriers he’s faced have been numerous, from the learning curve to assuming he is the “help” rather than the owner of his 50-acre Abbey Creek Vineyard. The vineyard is situated in North Plains, Ore., on the northwest outskirts of the Portland metro area.

“It’s not so much the peers that [are a barrier], but marketing dollars, associations and things like that are painting the picture of what the wine industry is supposed to look like,” Faustin said.

And though he raked in a six-figure salary in his previous field, the wine industry has an embedded “high-brow” attitude, Faustin said. He also said nepotism can make it hard to break into the industry and even harder to thrive in it.

Faustin said had it not been for his in-laws, who previously owned his property, the journey would have been all the more difficult.

Nonetheless, Black people are increasingly making their presence in the wine industry known.

According to online news source Atlanta Blackstar, African Americans own about about 5 percent of the 8,000 wineries in the U.S. and are steadily growing in representation.

From individuals and families with an entrepreneurial spirits to well-established folks like Bay-Area based rapper E-40 who recently released his own line of wines under the label Earl Stevens Selections, the growth is coming from an array of places.

Though Faustin, who is actually first generation Haitian-American, bears the title of Oregon’s first Black winemaker, it should be noted that Oregon lags behind California and Washington in terms of wine production, with California producing 90 percent of the wine made in the U.S.

In 2002, a group called the African American Association of Vintners was formed with the aim of elevating Black winemakers. But that group’s website hasn’t been updated since 2011 and attempts made to reach out to the organization went unanswered, he says.

Nonetheless, Faustin says he’s doing his part to elevate the presence of Black winemakers by continuing to innovate, and of course through the upcoming Red, White and Black film.

“My best is my next -- that’s my motto,” he said. “I’m always trying to do something a little different each year to change my style, and change the game, especially to stay relevant in the wine industry.”

Eight years deep into his craft, he’s still learning, and seeking out mentors with decades more experience than he into molding grapes into the finest consumable beverage.

He attributes his success to those who’ve helped see him through the process, a “go out and do it” attitude and desire to craft at his highest level.

And as for minority groups, who may feel intimidated away from the old-money industry, he said though the institutional barriers can be real, he urges people to remember the root of the craft.

“At the end of the day it’s just wine. It’s some grapes we’re making juice with,” Faustin said. “Minorities get pushed out because we feel like we can’t do that. Because we don’t have [long line] of winemakers so we don’t have that pedigree, or because we’re not rich we can’t be in this industry. And that’s what I’m hoping to change."

An Indiegogo campaign is currently underway for Faustin’s Red, White and Black documentary with a goal of raising $25,000 by Sept. 22. To contribute, visit indiegogo.com and type the name of the film in the search box.