Renters in a State of Emergency 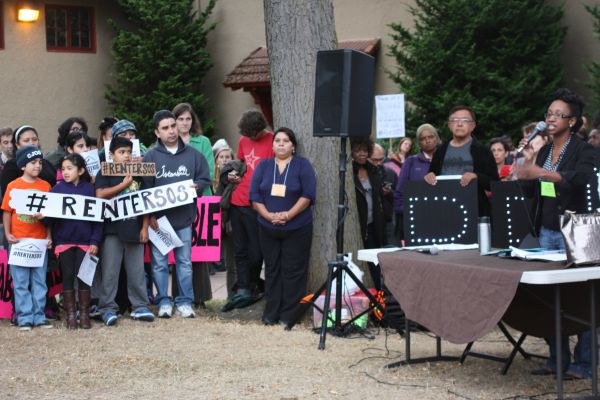 Tensions are running high for tenants in Portland’s rental market.

Rising rents and building-wide evictions dump droves of renters on the street looking for new housing. Apartments listed on Craigslist -- often at prices out of reach for average renters --are snatched up within hours of posting. Rising vitriol on online forums condemn a housing market that has become predatory.

Wednesday morning, the Portland Mercury reported that housing commissioner Dan Saltzman introduced short-term measures to protect renters in a rapidly changing market. Landlords are now required to give 90 days notice for no-cause lease terminations, and must give the same amount of notice if they intend to raise the rent by more than 10 percent. Mayor Charlie Hales went on record as supporting the new protections.

The proposed protections come on the heels of a Tuesday-night press conference at which the Community Alliance of Tenants declared a renter state of emergency, and a Tuesday-morning stakeholder meeting on the future of affordable housing in Northeast Portland.

Justin Buri, the executive director of CAT, said people in Portland are being displaced at an alarming rate.

“Too many tenants over the summer are being pushed out from unreasonable rent hikes, drastic rent hikes, rent hikes that force them out of their home and into one of the worst rental markets in Portland history -- and they only have 30 days (to move),” Buri said.

He also said that CAT’s renter’s rights hotline is getting an unprecedented number of calls regarding rent hikes and no-cause evictions. The health and social services hotline 211info has seen an 8 percent increase housing-related needs requests over the last year.

According to a recent study of rent prices nationwide, the Portland area is the fourth fastest-growing rent, increasing 8.5 percent from July 2014 to July 2015. The city of Vancouver, Wash., has the fastest-growing rent in the entire country, with a 9.8 percent rise from last summer to this one.

On Tuesday, the renter’s rights organization held a rally in North Portland at Peninsula Park to draw attention to the housing crisis. Across the street from the rally were the Brentwood and Pinecrest Apartments which were closed off with bright yellow caution tape.

It was a fitting backdrop for the gathering as these apartments issued building-wide eviction notices, leaving many families scrambling for affordable rents.

“There are very few affordable housing units in Portland, and they will often be competing with 20 other tenants at the same time,” Buri told The Skanner News.

The rally included stories from Jeri Jimenez and Juan Gonzalez and his family. Jeri and Juan were long-time residents of the Brentwood-Pinecrest Building in North Portland. Both ran into barriers securing new housing, as Jimenez has a felony conviction and Gonzalez said he faced racial discrimination.

Gonzalez said he had lived in North Portland for 12 years and is now doubled up with his four children in his sister’s apartment, still looking for a place to live.  He told his story through choked tears.

Katrina Holland, the deputy director for CAT, announced three stopgap measures for the renter state of emergency. The first was a year-long ban on no-cause evictions. The second demand was a one-year notice period for rent increases that are larger than five percent.

“We believe that 5 percent is a reasonable amount to raise the rent from year to year, but what we are seeing is rent increases of 30, 40, sometimes even 80 or 100 percent with only 30 days to respond,” Buri said.

Lastly, Holland asked for landlords to sign a pledge to voluntarily commit to those solutions. “We hear from landlords every day. There are some who do not agree to the level of greed and pain that we are seeing,” she told the crowd.

Matthew Tschabold, the Equity and Policy manager for PHB, gave an update on the preference policy for these projects. The policy would give preferential housing to people who once lived in the Interstate corridor but had been displaced by gentrification. The policy also covers those in the area who had property taken by the city for development projects such as the Memorial Coliseum or Emanual Hospital.

Holt told The Skanner News the meeting is an opportunity to ask questions and ensure that promises made to the Black community were being kept.

“The committee members are people of community, people who are invested and we are committed to seeing something happen differently this time around,” Holt said.

Participants at both gatherings challenged Portland to act on its reputation as a progressive city, and to balance development and inclusion. As Holland wrapped up her speech at the rally, she strongly echoed those sentiments.

“Community development and stability can coexist without displacement. Portland can be an inclusive place… a place where people can grow their dreams, contribute to the community, and people can keep a place to call home,” Holland said.

For more information on the Community Alliance of Tenants Renters State of Emergency, visit their website or facebook page.