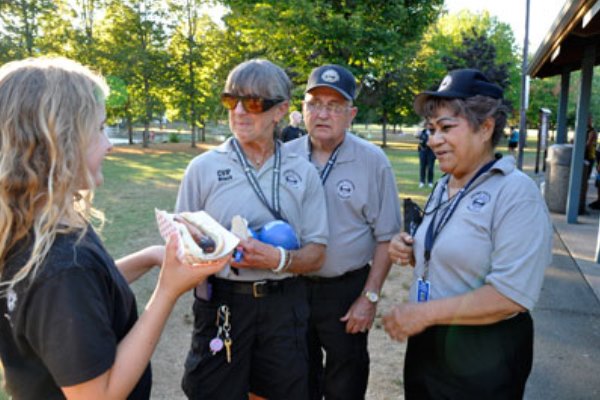 The Gresham Police Department is now accepting its final round of applications to become a citizen volunteer in policing.

The deadline to  apply is 5 p.m. Friday, Sept. 11, so those wanting to throw their hat in the ring should do so as soon as possible.

The department is looking to fill up to 15 spots on its volunteer force.

The Gresham Police Department implemented the program just over five years ago, in an attempt to enhance community engagement and simply add to an understaffed force of 120 officers.

“It’s a force multiplier in that, they’re eyes -- and really that’s all they are, is just eyes. Whether it’s about suspicious or unusual behavior, they give us a call like any other citizen would, except that they are specifically trained to understand our role [as police] than the average citizen.”

Responsibilities for a Citizen Volunteer in Policing span a number of duties from reporting graffiti, deploying the speed meter radar, assisting in curfew sweeps, to delivering food boxes.

Those selected will be put through a nine-week Citizen Academy, in which they will learn the ins and outs of the police department and all its different units, from K-9, to SWAT to traffic.

“There’d be different sections on all of those and delve a little deeper than your average citizen about those particular units about how they operate, why they operate, why we do what we do, why we don’t do some things that people would like us to do -- and it just creates a better understanding,” Grandjean said.

Not to be confused with Neighborhood Watch, Citizen Volunteers can cover a broader territory.

“In a Neighborhood Watch situation, you are tied geographically,” Grandjean said. “The most powerful thing that Neighborhood Watch [volunteers] get to do is get to know their neighbors. You’re familiar enough to where, if something is unusual, like someone’s garage is open and it’s usually not, I have a phone number and can give you a call and ask you, ‘Hey did you know your garage was open?’”

Citizen volunteers  can be spotted in grey and navy blue uniforms in neighborhood parks and trails, schools, residential areas and commerce centers.

Citizen Volunteers in Policing are facilitated and sanctioned by the Gresham Police Department.

Of the 26 people that make up the current force, eight are women while the rest are men. Sgt. Mike Amend, who oversees the program, estimates that two-thirds of the program’s volunteers are retired.

The department told The Skanner it does not keep records on the volunteers’ race.

Once added to the force, volunteers remain there until they choose to leave or are found guilty of violating the program’s guidelines.

Things that could lead to dismissal include confronting someone directly while on the beat, or carrying a weapon while on force time.

When asked if a registered gun owner could carry a firearm while patrolling for the volunteer force, Grandjean said while they would not be in violation of any law, it would lead to immediate dismissal.

To date, no one has been dismissed from the Community Volunteer force.

Applicants must be 21 years of age or older and live or own a business within Gresham's city limits. They must also pass a DMV and criminal background check and be fingerprinted.

To apply to become a Citizen Volunteer in Policing for the Gresham Police Department, visit https://greshamoregon.gov/CVIP/.