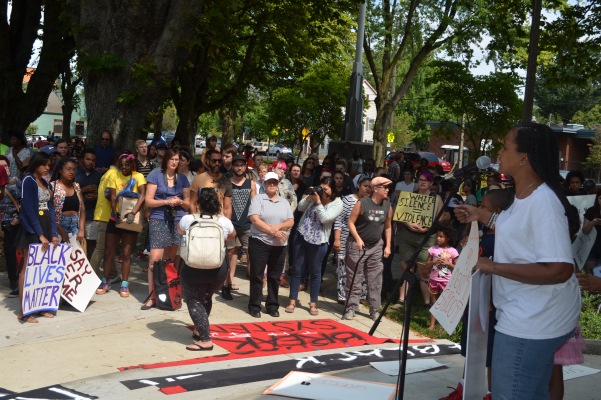 Two of the hottest acts in music today -- singers Janelle Monae and Jidenna -- lent their star power to a rally in Dawson Park Monday afternoon, calling attention to ongoing police brutality and violence across the country.

Though the two were greeted with cheers and applause upon stepping onto the famed gazebo, they let the crowd of about 300 know that their attendance was solely a show of solidarity with those working to stop violence across the country.

“We come here not as celebrities, not as artists, but as human beings,” Jidenna said to the crowd.

“One of the things that we believe is that silence is our enemy and sound is our weapon,” Monae said. “I look at these beautiful babies this diverse crowd, we are all one. Let’s get rid of this race thing that we’re dealing with right now, we are human beings, let’s look out for each other.”

Monae then helped lead the crowd in singing a song she says she crafted specifically for “the people out there fighting in the streets” titled “Hell You Talmbout.” The song is a boisterous protest track fashioned in the vein of Negro spirituals, calling out the names of those who’ve died at the hands of law enforcement.

Raiford said she was happy to see the community come out and support one another.

“I’m happy that they came out. I’m happy that Janelle wrote that song,” Raiford told The Skanner. “I’m happy that she dedicated it to every breath and every step that has been taken in honor of this movement, and I’m happy that she’s moving around the country with these free shows to help uplift our work because as they let us know, they know that we have it hard. So they’re saying, ‘We’ll make it cool for you, we’ll use our art to do that, that’s a tool. That’s Black power.”

Jesselle Hedman, a senior at Portland State University, was one of the many faces in the crowd on Monday. She said she’s been increasingly drawn to issues around police accountability in recent years.

“I’ve missed some of the police accountability events that we’ve had in the past, but I think right now is really the time to be against those things. I have a brother, I have a sister, I have family, I am those people that are going through those things and I can’t just sit and do nothing,” she said.

Though Monae invited law enforcement to attend the rally, none were visibly present.

The event also doubled as a drive to gather school supplies. Though unsure of how much was collected, Raiford said some attendees were allowed to take home materials at the park, while the rest were later dropped off at Columbia International and in Northeast Portland for a Rosemary Anderson High School’s backpack giveaway at Plaza Del Sol Wednesday.

As for Monae and Jidenna, they performed later that night at the Roseland Theater downtown to a packed crowd, with labelmates Wondaland, in what was their last show before wrapping their tour in Monae’s home base of Atlanta, Ga. at the end of the month.  Reportedly, Monae closed out her set that night by performing “Hell You Talmbout” for a second time that day.

The two will continue to attend similar rallies on their tour.

In an interview with New York radio-station Hot 97 earlier this month, Monae said community has been at the “forefront” of their movement.

“We looked at the music industry, and no disrespect to anybody working hard, getting their money, focusing on what they need to focus on, but we saw a lack of voices that were bringing something new, a different perspective,” Monae said.