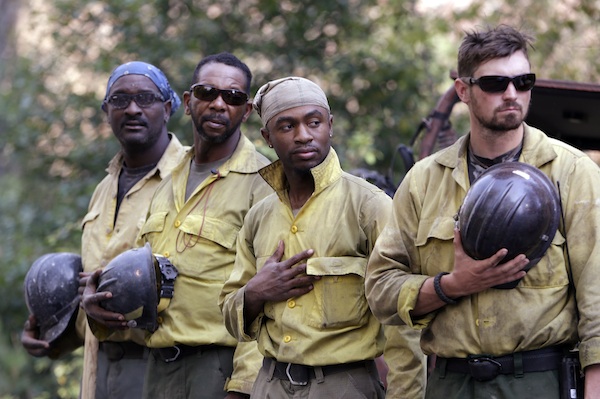 TWISP, Wash. (AP) — The firefighters — members of a specially trained unit that is sent into danger ahead of everyone else to size up a wildfire — rushed up a narrow, winding gravel road with steep hills on either side.

It proved to be a deathtrap.

Their vehicle crashed, and before they could escape, flames rolled over them, killing three firefighters inside and injuring four others nearby, one critically, authorities said.

The tragedy Wednesday night cast a pall in Washington state and brought to 13 the number of firefighters killed across the West this year during one of the driest and most explosive wildfire seasons on record.

The blazes have "burned a big hole in our state's heart," Gov. Jay Inslee lamented Thursday, describing the outbreak as an "unprecedented cataclysm."

Fire officials with notebooks and cameras walked the hills and banks near Woods Canyon Road outside Twisp, investigating how the disaster happened. Authorities gave few details, shedding no light, for example, on the crash, other than to say that it was not the accident itself that killed the victims, but the fire.

The deaths happened in the scenic Methow River valley about 115 miles northeast of Seattle, where a series of blazes covering close to 140 square miles had merged. The flames burned an undetermined number of homes and triggered orders to about 1,300 people in the outdoor-recreation communities of Twisp and Winthrop to evacuate.

"It was a nightmare," Okanogan County Sheriff Frank Rogers said. "Everything was burning." He added, "We know it was a firestorm in there."

All the dead were U.S. Forest Service firefighters. The agency identified them as Tom Zbyszewski, 20; Andrew Zajac, 26; and Richard Wheeler, 31. Their hometowns weren't immediately released.

Zbyszewski was a junior at Whitman College in Walla Walla, majoring in physics and active in the school's theater department, the college's president said in a statement. He was fighting a fire near his hometown of Carlton when he died.

Zbyszewski's parents had both fought wildfires for the Forest Service, and his mother, Jennifer, still works for the agency, overseeing trails and campgrounds in Okanogan National Forest. They said he enjoyed the work and he felt it was important to be able to protect the homes of people he knew.

"He only had a week to go and he'd be back in college," his sobbing father, Richard, told The Associated Press in a telephone interview. "I fought fires for years and years and years — I never even got burned. I wish it was me. I'm an old man."

All three men were from highly specialized crews that go into dangerous areas as fast as they can to examine a scene and report back to commanders on what needs to be done, said Bill Queen, a firefighting spokesman.

"It just kind of exploded and they got caught in a burn over," said Queen, referring to what happens when conditions change so rapidly that flames overtake firefighters.

Nearly 29,000 firefighters — 3,000 of them in Washington — are battling some 100 large blazes across the drought- and heat-stricken West, including Idaho, Oregon, Montana and California.

Conditions deteriorated in Washington on Thursday, with high winds and high temperatures. A mandatory evacuation order was issued Thursday night for the 1,000-person town of Tonasket in north-central Washington, about 60 miles northeast from where the firefighters were killed.

Jessica Gardetto of the National Interagency Fire Center in Boise, Idaho, said the 13 dead firefighters so far is a relatively high number. There were 10 fatalities last year and 15 in 2012. But there were 34 in 2013, including 19 members of an elite firefighting crew killed by an out-of-control wildfire near the small town of Yarnell, Arizona.

Of the injured in Washington, the most seriously hurt is Daniel Lyon, 25, of Puyallup. The Forest Service employee had burns over 60 percent of his body and was listed in critical condition at Harborview Medical Center in Seattle, the Forest Service said.

Two of the injured work for the state Department of Natural Resources and one is a contractor with that agency. They have been released from the hospital, DNR spokeswoman Carrie McCausland said. She declined to release their names.

Rick McCauley, a manager at Sun Mountain Lodge, which sits at the end of an 18-mile road winding through forests from the town of Winthrop, said he had about 70 rooms filled when he decided to evacuate the hotel.

"We looked at the fire coming over the hill and made the decision to clear everyone out," he said. "There's only one road in and out, so we don't want to take any chances."

Steve Morse, who lives near the Twisp fire, said he watched flames "kind of hop-scotching these ridges, working toward our house."

"I can't even imagine. To lose your life fighting fire, it's horrible for a family, and it's just a bad deal," he said.