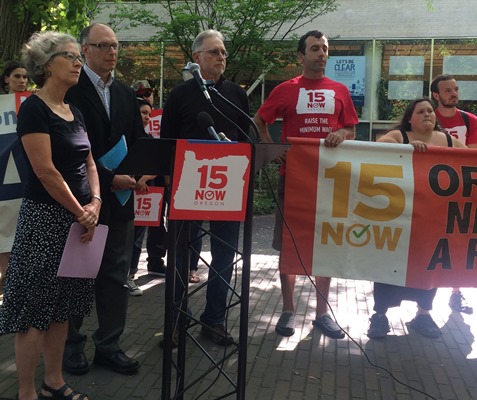 Economists stepped up to the podium at Portland State University on Tuesday voicing their support for lawmakers to increase  the state minimum wage to $15 an hour.

All Oregonians, King said, will benefit from having an increase to what she called “higher wages at the bottom.” The current minimum wage – which $9.25 per hour in Oregon, two dollars above the federal minimum of $7.25 – is a disgrace, she said.

According to King, the minimum wage hit its peak value in 1968, when its market value equated in today’s economy to $11 an hour.

“A substantial increase in the minimum wage is long overdue,” King said.  “In Oregon we feel good to have a minimum wage of $925. That’s still only 84 percent of what our national minimum was half a century ago. This is not the market. This is not inevitable. People have made decisions that have us here, and that’s why we have much lower wages at the bottom than all the other wealthy nations.”

Landsberg says that in America wages have been staggering to keep up with the cost of living for decades and those that have benefitted have mostly been the country’s top percent of wage earners.

“People at the top have done well, but most others have not,” Landsberg said. “It would be foolish of us to wait for market forces to change market conditions.”

Landsberg attacked a popular class and economic platform commonly used by Republicans, theorizing that policies designed to increase profit lead to more reinvestment and rapid growth and henceforth better wages for all.

“Profits have soared and none of the rest has followed,” he said. “Firms are not using their money for investment or job creation. The money is going to mergers, higher dividend payouts, and stock repurchases.”

About 17 percent of Oregonians live in poverty.  The three economists agreed that reducing poverty rates has a number of known benefits that lead to stronger communities, including better performance in schools, cuts in teen pregnancy, reduction in crime, and an increase in general wellness.

The Skanner spoke with Hahnel about what implications an increased minimum wage could mean for Black Oregonians, about one-third of whom live in poverty.

Hahnel said because of historic practices, Black people are disproportionately represented in low-wage jobs and that the bump to $15 would be a tool to combat economic racism.

“Blacks are disproportionately at the low-end of the wage spectrum. Raising the minimum wage would, therefore, have a particularly beneficial effect on reducing, not eliminating, the degree of economic discrimination and exploitation they face”

Hahnel says pressuring local lawmakers through calls and emails to their offices is an effective mode of pushing this agenda through.