Hendrix Exhibit Steps Out of the Limelight 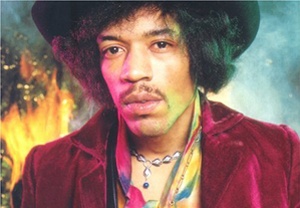 The Jimi Hendrix exhibition at Experience Music Project|Science Fiction Museum and Hall of Fame will be de-installed in August. Museum guests will be able to see the exhibition through Sunday, Aug. 5. Since the majority of the objects have been on display since EMP opened in 2000, it is time for many of the items to be "put in the dark" to help preserve them. A new temporary exhibition space—which will total approximately 5,000 square feet — will be created, giving EMP|SFM more flexibility for its exhibitions.
American Sabor: Latinos in U.S. Popular Music, which opens on Oct. 13, and runs through Sept. 7, 2008, will be the first exhibition to be housed in the expanded space.
"Jimi's clothing and one-of-a kind drawings, paintings and lyric sheets need to be preserved; and as with any artifact, it is necessary to rest them from time to time," said Jasen Emmons, director of curatorial affairs for EMP. "Jimi Hendrix is a great inspiration for the museum and its visitors, and we will continue to keep his presence in the museum."
A number of artifacts from the exhibition that are not as susceptible to light will remain on display at EMP|SFM. To honor the 40th anniversary of the Monterey Pop Festival, EMP|SFM will create a display near the If VI WAS IX: Roots and Branches guitar sculpture with objects related to Hendrix's performance at the festival. The display will include the red Fender Stratocaster guitar that he smashed and burned on stage as well as posters and other objects from the historic concert. Hendrix's white Fender Stratocaster that he played during Woodstock will be placed on display in the Guitar Gallery. Three films about Hendrix will be shown in a screening room at EMP|SFM, and oral histories from people who worked with Hendrix will be featured in the Sound and Vision: Artists Tell Their Stories exhibition.
A year after the objects have rested, EMP|SFM will look at the future of the Jimi Hendrix exhibition. EMP|SFM has received interest from other museums and cultural institutions to have the exhibition tour. From October 2002 through January 2003, a smaller Jimi Hendrix exhibition from EMP was displayed at La Cité de la Musique in Paris, France. In the last six years, EMP|SFM has toured its exhibitions to cities around the world, including London, Rome, Amsterdam, Berlin, New York, Los Angeles and Chicago.
EMP's Jimi Hendrix collection contains many rare objects that illustrate both the personal and superstar aspects of the guitar hero, from his childhood growing up in Seattle to his time on the world stage.
Since EMP opened in 2000 and SFM in 2004, EMP|SFM has welcomed more than 3.6 million visitors through its doors. In January of this year, the museums launched All Access Nights at EMP|SFM, where the first Thursday evening of every month from 5 to 8 p.m. admission to both museums is free. Thus far, 10,000 people have visited the museum on All Access Nights at EMP|SFM. In March, the museum's ticket prices were lowered putting the admission cost in line with other museums and attractions in the area. Tickets are now $15 for adults and $12 for seniors, youth and students and military personnel with ID. Children under 5 are free.