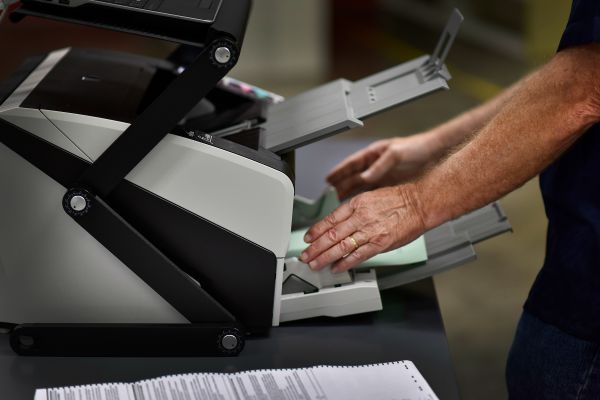 Multnomah County election officials say their new vote tabulation system will increase the speed, accuracy and transparency of the vote counting process – and that overhauling the system was cheaper than an upgrade would have been.

The county has replaced the former optical scanning system, which it had used for 15 years, with a new software-based voting system called ClearVote.

The new digital system scans the paper ballots, creates a high-resolution image of the vote and produces election results.

Election official Tim Scott said the county vote tabulation machines were in need of an upgrade after years of use.

“We had gone about 13 years without significant hardware or software upgrades,” said Tim Scott, Multnomah County’s director of elections. “There were just a lot of hardware failures that we ran into. It never affected the outcome of the elections, but it just meant that we dealt with some significant down time.”

Replacing the old hardware would have cost the county $500,000, paying $100,000 per scanner, Scott said. They were proprietary hardware running legacy software, he added, so if the county continued to use them they would get locked into paying to maintain an outdated system.

“Under the new system, we get a much better system, with much better software and we are only paying about $25,000 apiece for the scanners,” he said. The new system pairs off-the-shelf Fujistu scanners with the ClearVote browser-based software.

The new technology will be four times faster than the old system, scanning 4,000 ballots per hour instead of the previous rate of 1,000 per hour.

Scott said this speed comes from the increased accuracy of the new system. If one of the previous scanners came across a questionable ballot, it would stop working.

“The ballot had to be pretty perfect. If somebody had spilled coffee on it, or dripped ketchup on it or something like that, chances are that ballot would not have gone through our old scanners,” Scott said. “The scanners would stop and we would have to take the ballot out and send it somewhere else to be duplicated and to run clean ballot.”

The ClearVote system will make a note about questionable ballots and send them to be reviewed, while continuing to scan other ballots. Scott said the new system is much more tolerant of imperfections.

The new technology can also flag situations where it looks like a voter might have changed his or her mind by crossing out one oval and filling in another. In that case, a bipartisan team of election workers would look at the vote and determine the intent of the voter.

Voters may see a change in the layout of ballots. The new system allows for more flexibility in the design of ballots and allows officials to use smaller papers for elections with very few measures.

The new voting system uses the same security protocols as before. Scott said the vote data is stored in a closed network in one room with no outside access. Very few people can gain entry to the tally room and each tabulation work station is encrypted and tracks who was overseeing which ballots.

Scott said the county plans to use the new system during the November election later this year.