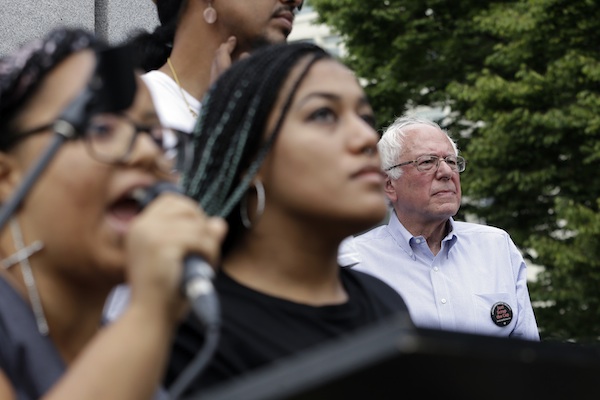 SEATTLE (AP) — Democratic presidential candidate Bernie Sanders spoke to a packed crowd Saturday night at the University of Washington campus about his commitment to criminal justice reform as well as addressing income equality.

Sanders gave his talk to a cheering audience of about 12,000 inside a university pavilion a few hours after he was shoved aside by several Black Lives Matter activists who are calling for changes to the criminal justice system. Sanders eventually left the Saturday afternoon event at Westlake Park in Seattle without giving his speech.

At the University of Washington rally, Sanders addressed the issues raised by the protesters.

"No president will fight harder to end institutional racism and reform criminal justice system," he told the cheering crowd at Hec Edmundson pavilion, according to the King5-TV station. "Too many lives have been destroyed by war on drugs, by incarceration; we need to educate people. We need to put people to work." 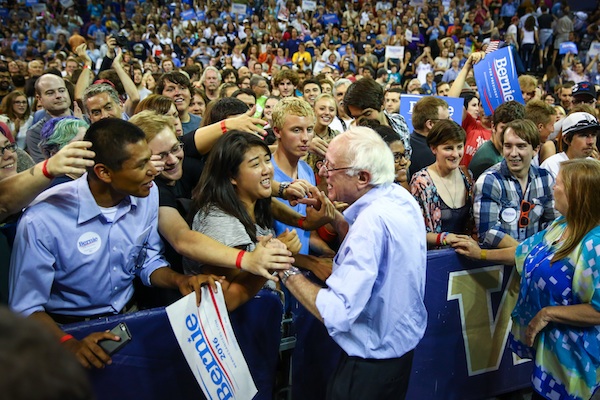 Earlier in the day, Sanders was just starting to address several thousand people gathered shoulder to shoulder at Westlake Park when two women took over the microphone. Organizers couldn't persuade the two to wait and agreed to give them a few minutes. As Sanders stepped back, the women spoke about Ferguson and the killing of Michael Brown and held a four minute moment of silence.

When the crowd asked the activists to allow Sanders to speak, one activist called the crowd "white supremacist liberals," according to event participants.

After waiting about 20 minutes, Sanders himself was pushed away when he tried to take the microphone back. Instead, he waved goodbye, left the stage with a raised fist salute and waded into the crowd. He shook hands and posed for photos with supporters for about 15 minutes, and then left.

The rally at Westlake Park was organized as a birthday celebration for Social security, Medicare and Medicaid.

Sanders later issued a statement on his website expressing his disappointment about the interruption.

"I am disappointed that two people disrupted a rally attended by thousands at which I was invited to speak about fighting to protect Social Security and Medicare. I was especially disappointed because on criminal justice reform and the need to fight racism there is no other candidate for president who will fight harder than me," he said.

It's not the first time that Black Lives Matter activists disrupt the Vermont senator's event.

At a town hall for Democratic presidential candidates in Phoenix last month, protesters affiliated with the Black Lives Matter movement took over the stage and disrupted an interview with Sanders and former Maryland Gov. Martin O'Malley.

In his campaign, Sanders has chiefly focused on issues like the middle class, climate change and criminal justice reform. In addition to advocating a $15-an-hour minimum wage and raising taxes on the rich, Sanders also supports a massive government-led jobs program to fix roads and bridges, a single-payer health care system, an expansion of Social Security benefits and debt-free college.

Sanders will be driving to Portland on Sunday and is scheduled to hold a Sunday night rally at Portland's Moda Center, which has a capacity of about 19,000 and is home of the NBA's Portland Trail Blazers. The event had originally been scheduled at Veterans Memorial Coliseum, which can handle about 12,000.

Sanders heads to an event in Los Angeles on Monday.