Oregon Bottle Deposit May Rise from Nickel to Dime 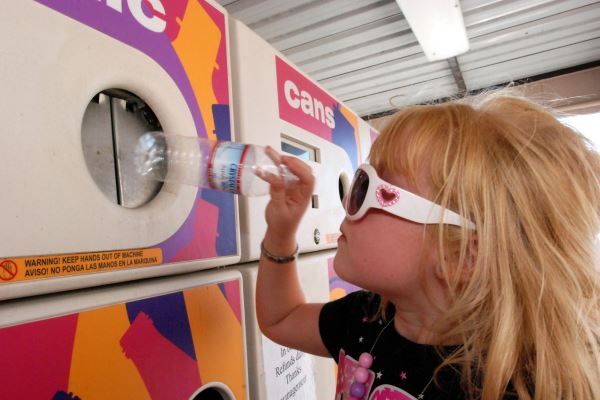 SALEM, Ore. (AP) - New state data show that Oregonians are returning fewer beverage bottles to redeem their 5-cent deposit, putting the state on track to double the deposit to 10 cents per bottle in 2017.
Figures released by the Oregon Liquor Control Commission last week showed that just over 68 percent of bottles were redeemed in 2014, down nearly three points from the year before.
Under a 2011 law aimed at stemming the downward trend in bottle redemption, the deposit is slated to rise Jan. 1, 2017, if the redemption rate does not stay above 80 percent for two consecutive years.
"The dime will get the consumer's attention in a big way," said Vicki Berger, a former state representative from Salem and a strong advocate for the bottle bill. "Unfortunately, it will probably cause a backlash against the bottle bill, which I don't want to see."
Berger's father came up with the bottle deposit concept and convinced state lawmakers to adopt it in 1971. It's credited with significantly boosting recycling and reducing litter, and has since been replicated in nine other states, 12 Canadian provinces and more than a dozen countries.
But redemption has fallen precipitously since the 1990s, when nearly all containers were returned for a refund. That's due in part to the growth of curbside recycling and consumer frustration with grocery store redemption rooms.
When they adopted the deposit hike, lawmakers tried to make the bottle-return process less frustrating. They allowed unified redemption centers that aim to be cleaner, faster and larger than those in grocery stores. The installation of redemption centers has increased redemption rates within a 3.5-mile radius, though by varying degrees, said Cherilyn Bertges, a spokeswoman for Oregon Beverage Recycling Cooperative, which collects and recycles containers statewide.
At one store in Portland, the number of redeemed cans doubled, she said, while others have seen a smaller increase of 10 to 15 percent. Twelve centers are now open, with plans to eventually create about 45.
"We believe the redemption centers are helping," Bertges said. "They are increasing the (redemption) rate where they exist. They just don't exist in enough places yet."
Backers of the bottle bill say redeeming the deposit is preferable because the materials are presorted, preventing contamination and avoiding the substantial sorting costs associated with curbside recycling.
Another big change to the bottle bill is also on the way.
In 2018 the bottle deposit will begin applying to glass, metal or plastic beverage containers except those containing milk, wine or liquor - a significant expansion over the current system. Lawmakers said it made little sense that a soda bottle would require a deposit but a nearly identical iced tea bottle would not.
"People don't realize the billions and billions and billions of consumer containers in Oregon that never went into the waste stream, that were actually recycled," Berger said. "Particularly aluminum, which is so highly recyclable. All the energy that didn't have to go into making new containers."