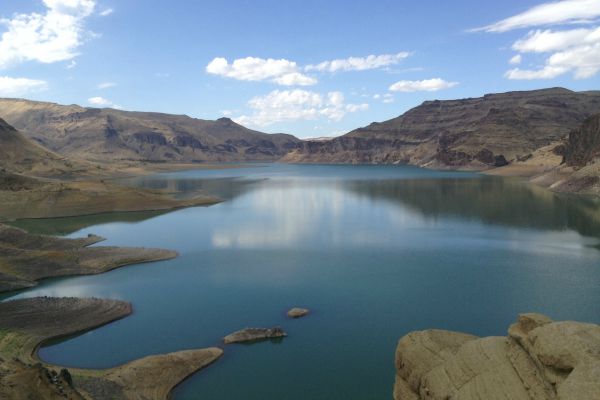 PORTLAND, Ore. (AP) — A deepening drought in the Pacific Northwest is forcing some cities, farms and state agencies to cut back on water use.

Eleven cities and towns across Oregon have imposed some form of water conservation, The Oregonian reported. Those range from simply asking residents to exercise restraint to threatening $300 fines for anyone who turns on the hose without permission.

Lake Oswego wants residents to aim for a 10 percent reduction in water use, and a water conservationist is going house to house to help people craft watering plans that keeps plants alive with minimal irrigation. The city, which takes its water from the Clackamas River, said it isn't running out, but cutting use is "just responsible," said the city's water conservation coordinator, Kevin McCaleb.

In Portland, Water Bureau officials said they expect to avoid citywide cutbacks this year, but the reservoir which supplies Portland's municipal water is 3 billion gallons short of its average July supply. To make up the difference, water managers are pumping groundwater from wells near the Columbia River.

And in Ashland, city workers are carpeting street medians with artificial turf and offering cash incentives for residents who swap their lawns for drought-hardy landscapes.

"We're really focused on making the long-term changes that will help us in the future," said Julie Smitherman, Ashland's water conservation specialist.

The situation is most dire in Oakridge and Junction City, where water levels in wells have dropped significantly. In both cities, it's now illegal to water lawns and gardens outside of approved dates and times. Those who don't comply face fines.

That approach is now common in California, which is in the fourth year of the drought. California's governor has ordered a 25 percent statewide reduction in urban water use compared to 2013, leading communities to limit lawn watering, impose fines and add drought penalties to water bills to dissuade consumption.

Earlier this week in Oregon, Gov. Kate Brown ordered all state agencies to limit water use in an effort to reduce the state government's water budget by 15 percent over the next five years.

Diana Enright of the Oregon Water Resources Department said the agency is sharpening its focus on long-term water conservation, given the strong evidence that Oregon's days of abundant snowpack and comfortable summers are numbered.

"West of the Cascades, we see Oregon — and the rest of the country sees Oregon — as a rainy place," Enright said. "If it's not that rainy, snowy place anymore, what does that new world look like?"

Brown has also declared drought emergencies in 23 of Oregon's 36 counties, a move that grants the state water department greater authority to regulate water rights and qualifies farmers and ranchers for federal assistance.

In Washington state, several cities including Seattle, Everett and Tacoma have activated water shortage plans. And in Vancouver, B.C., residents are forbidden from watering plants or washing cars.

Some farm irrigators have also been told to use less water. Surface water irrigators along the Klamath Basin's Sprague River have been told to turn off their spigots. Anyone else in the basin with water rights obtained after 1905 has been regulated off to save water for senior water users.

And three irrigation districts — two in Hood River and one in Corbett — have asked or ordered their members to use less.

Agriculture and industry make up the bulk of the state's total water use, officials said.