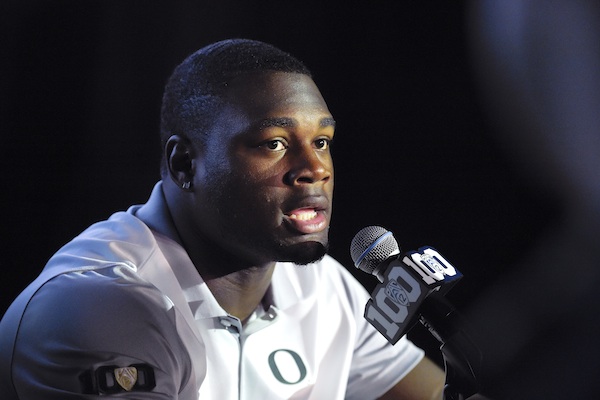 Helfrich wouldn't address Adams' status with the program, his prospects to replace Heisman Trophy winner Marcus Mariota — or even refer to the FCS first-team All-American by name at Pac-12 media days on Friday.

"I know everybody will want to address the quarterback position, and the only thing we're going to talk about are the people that are here and involved in the program," Helfrich said.

Adams threw for 10,438 yards and 110 touchdowns in three seasons at Eastern Washington, producing particularly memorable performances against Pac-12 opponents. Adams passed for 411 yards and four touchdowns and rushed for 107 yards and two TDs in a 2013 win at Oregon State, and he threw for 475 yards and seven touchdowns in a 59-52 loss at Washington last season against a Huskies defense that featured three first-round draft picks.

Adams announced in February he would transfer to Oregon, where he would be immediately eligible for his senior season as a graduate transfer. However, Adams has not completed course work to obtain his degree from Eastern Washington, and might miss the start of the Ducks' fall camp.

"We're just worried about the guys we have," linebacker Rodney Hardrick said. "Our coaching staff is amazing. I'm confident whatever situation we're put in, we're going to make the best out of it. We're going to go to war with who we have each and every day."

Jeff Lockie, Mariota's backup for the last two seasons, took the majority of first-team reps during spring practice and received strong marks from teammates and Helfrich.

"He improved a lot," Hardrick said. "He's very efficient, and I'm excited to see what he can do. At times I felt like he was thinking too much. Once he relaxed and now is more comfortable in his position I think he's going to do a lot of good things."

What Lockie lacks in game experience, having attempted just 41 career passes, he makes up for in familiarity with the prolific up-tempo spread offense that has lifted Oregon to national prominence.

Lockie has a point guard mentality and is willing to distribute the ball to the Ducks' strong collection of skill players, Helfrich said, That approach is exactly what the second-year coach is looking for to replace Mariota.

"We don't need somebody to come in and try to be Superman when they're not," Helfrich said. "We need them to play their role well, utilize the strengths we have on our team and go."

That will mean handing the ball to Pac-12 offensive freshman of the year Royce Freeman at running back and getting it out in space to a group of wide receivers that includes Byron Marshall — who transitioned from 1,000-yard rusher as a sophomore to 1,000-yard receiver last season — two-way threat Charles Nelson and even Bralon Addison, who missed last season with a knee injury.

The passing game could get even stronger if Devon Allen and tight end Pharaoh Brown are able to return from knee injuries, though Helfrich could not update their status.

The availability of Darren Carrington, who caught seven passes for 165 yards and two touchdowns in the Rose Bowl, is also a question mark after being suspended for the College Football Playoff title game.

"We have so many weapons," said Freeman, who rushed for 1,365 yards and 18 touchdowns last season. "The quarterback is just helping us facilitate. We have confidence whoever it is who is going to step up."