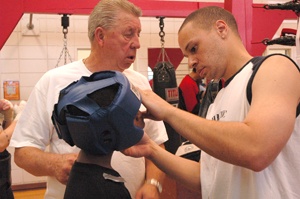 You have to see it in their eyes, in their attitudes, says Knott Street Boxing Club Coach John Peters. Some kids have it and some kids don't.
"There are a lot of kids who come in here and they work out, they fight, but they don't have the drive," Peters, known as "Johnnie" to his boxing fans, says. "Corey has it. You could see it right away. He's got good hand speed, quickness and he listens. I wasn't surprised when he won nationals."
The up-and-coming boxer Peters is talking about, 15-year-old Corey Hill, has just entered the boxing gym at Matt Dishman Community Center with his father, Stan Dunn, a former boxer who helps Peters coach the army of young boys who come to the boxing club every evening, Monday through Thursday, to perfect their punches and hone their steps.
"This was our hangout when I was a boy," Stan Dunn says. "And I always wanted my sons to box."
But Corey, Dunn's oldest son, wasn't interested at first.
"He wouldn't come with me, but then he came with an older friend of his and he hasn't ever left," Dunn says, smiling at the ring, where Corey is sparring with his younger brother, Darius, a 12-year-old who's going into eighth grade at Parkrose Middle School next year. Corey, 15, will be a 10th grader at Reynolds High School.
He's been going to the Knott Street Boxing Club – made famous in the early 1970s after producing former U.S. Lightweight Champion Ray Lampkin Sr., the first African American boxer from Oregon to go to the World Championships – since he was 9 years old, and Corey already shows signs of becoming a great boxer.
Two years ago, Corey won the national amateur boxing competition for his weight class – then 70 pounds. This year, fighting in the amateur division still, but now at 101 pounds, Corey came in second at nationals, winning the silver medal and losing by a three-point decision. 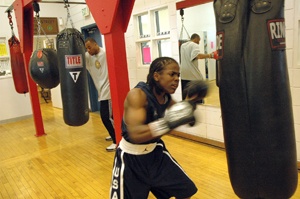 "That's a close call," Peters says. "Very close."
Corey's father wonders what would have happened if the Knott Street team had more resources.
"We didn't have enough money to send a coach with him, so Corey had to travel by himself, with the Tacoma Boxing Team," Dunn says. "It might have been different if I'd been there, or if Johnnie had been there. He might have won nationals again."
Coming in second – beating all but one of the best young boxers the United States has to offer – didn't disappoint Corey.
After he returned from nationals, the young man who idolizes Sugar Ray Leonard returned to his normal routine – training four days a week for two hours at a time. During the school year, Corey comes home from school, does his homework, waits for his dad to pick him up and comes straight to Matt Dishman to work out.
"It's a lot of hard work, but he's used to it," Dunn says of his son. "I don't even have to tell him to get ready anymore."
The hard work is paying off for Corey. Other boxers call him "the future of Knott Street" and say he has what it takes to become a professional boxer.
First, though, Corey could try for the Olympics. If he sticks to his routine, keeps training with Peters, who has produced several professional boxers and works with three professionals at the Knott Street gym, Corey could qualify for the 2012 Olympics, Dunn says.
"After that he could go pro," Dunn adds. "But we've been told that he should try for the Olympics first." 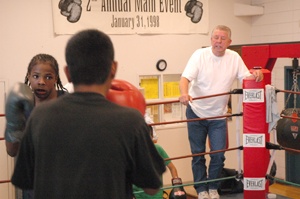 In the ring, this young man's concentration shows in every muscle on his face.
"He's good," says Marshall Akom, a Milwaukie Police officer whose own son, Kwasean Akom, 11, a King Elementary School student, has just finished sparring with Corey. "Corey is a fantastic leader amongst all the other kids here. He is one of the most focused 15-year-olds I've ever seen."
Akom grew up in North Portland and started boxing in the U.S. Army. When he returned to Oregon, he knew he wanted his son to be a boxer, to learn the discipline and the self-respect – and to be able to take care of himself.
When it came time to take Kwasean to a boxing gym, Akom didn't hesitate. He headed straight to Knott Street.

"It's the only gym on the East side of Portland that takes in amateur boxers," Akom says. "And it has a great history. But without Johnnie, this place wouldn't make it. A lot of people don't realize it, but Johnnie pays for all of this. He pays the lease to use this space, he pays for their trips, everything. And it's expensive. Without Johnnie, Knott Street would wither and die."
Dunn shares Akom's fears and is trying to fund-raise for the renowned boxing club. On Aug. 11, the club will host a fund-raiser at Catalina's Restaurant in East Portland, at 109th Avenue and Sandy Boulevard. And on Aug. 25, amateur boxers like Corey will fight at an exhibition match in Hillsboro, near the Intel campus to give the Knott Street Boxing Club more recognition.
"Some clubs have more support," Dunn explains. "But we rely on fund-raising and on donors. That's the only way we'll survive." 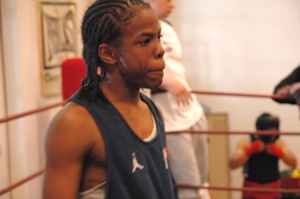 Peters brushes away praise for financing the club and says he's in it for the kids.
"I've had a lot of street type kids in here, a lot who have been in trouble," Peters says. "And this keeps them off the streets. I just try to understand their situation and to treat them right and I don't have any trouble with them."
But boxing "ain't what it used to be," Peters admits. The popularity comes and goes.
"Youth have so many activities to choose from," Peters says. "It's not like when I was a kid. ... But I think this is important. We keep them out of trouble and we keep kids off the street."