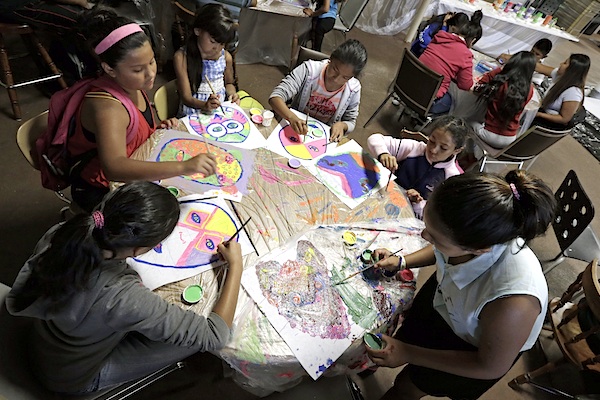 PORTLAND, Ore. (AP) — Portland may be known for fashionable hipsters, devotion to public transit, locally sourced chickens and artisanal food carts. But a part of this city by the river counters the narrative of livable, weird, predominantly white 'Portlandia.'

If East Portland was a separate city, it would be the second-largest in the state. Now some residents have filed a ballot measure that would change the city’s council so that city commissioners would be elected by district and would have to live in the districts they represent.

Long-overlooked by visitors and many locals, East Portland stretches far from downtown, on the city's eastern edge. It's ethnically and racially diverse, houses a large percentage of the city's children, low-income families and immigrants, and lacks many of the amenities of 'cool' Portland.

Here, shabby apartment complexes, fading strip malls, wide avenues and fast-food chains are the norm. But with a quarter of Portlanders now calling it home and rising costs pushing residents out of the inner core, East Portland has become hard to ignore.

In recent years, city officials have recognized East Portland's neglect, promising change and implementing improvements. But a group of residents says it's too little, too late. And in neighborhoods where sidewalks and parks are scant and crime is high, they're organizing to get greater representation.

A ballot measure filed earlier this month would overhaul Portland's at large elections and commission form of government in favor of a strong mayor and nine council members elected by district. Most council members would have to live in the neighborhoods they represent, which proponents say would mean better representation for East Portland and areas with less political clout.

"There's a magical line around the city, and the core gets all the money and all the special stuff," said Collene Swenson, an East Portland resident and the ballot measure's chief petitioner. "If we don't fix it, we're all in deep trouble."

Portland is the rare large American city that still elects leaders via citywide elections; most cities with 500,000-plus residents elect candidates by district. In recent years, lawsuits across the nation have targeted at-large elections, saying they prevent minority residents from electing candidates of their choice.

Once a stretch of berry fields and orchards, East Portland was unincorporated for years, with modest homes on large half to one acre lots, garages and vacant tree-filled land dotting the landscape.

Its reliance on septic tanks and cesspools led city, county and federal officials to push for annexation. Though East Portland residents opposed it — they even tried to form a city of their own — the area was annexed during the 1980's and 1990's.

But city-promised upgrades such as roads, sidewalks and parks never materialized. Over the years, housing stock deteriorated, schools ballooned with children (40 percent of the city's students live in East Portland), and mounting crime rates prompted the exodus of long-time residents.

"There's a lingering indignity," said activist Arlene Kimura. "You promised us all those things, and now you're surprised we're angry that it didn't happen."

In 2009, the City Council adopted the East Portland Action Plan, a blueprint developed by the community with more than 260 actions, from upgrading housing to promoting businesses.

Activists formed a group, which Kimura co-chairs, to advocate for the plan. At its request, the city began tracking its budget by district — which showed that East Portland's per-user expenditures were below the city average for transportation, parks and housing.

The plan faced hurdles due to a lack of buy-in and limited funding, Kimura said.

"There's a reluctance to accept that the cost is going to be high," Kimura said.

But the work has led to changes, residents say, such as new parks, crosswalks and rehabilitation of some housing units. Data shows city expenditures in East Portland are up, though in some cases still not at equitable levels.

"They're not investing in East Portland. They don't do anything for the taxes we pay," she said. "How about some real jobs that aren't vice, not strip clubs, pot shops, vape lounges and pawn shops?"

Earlier this year, Swenson and her neighbors filed a proposal to secede from Portland, but city staff determined the measure was flawed. The group now wants to change Portland's election format from citywide to district.

"If your council person isn't advocating for you, you can vote them out, because they're getting elected out of your neighborhood," Swenson said.

But Parks Commissioner Amanda Fritz said she's allocated more money to East Portland than a previous commissioner who lived there. She and others say the budget includes nearly $8 million for street improvements in East Portland. Rapid transit bus and new bus lines are planned.

Commissioner Steve Novick said he would support a switch. City-wide elections limit candidates to those who can raise lots of money, he said.

Regardless of their views on elections, city officials hope East Portland can become a mixed-income, walkable community. But Kimura fears improvements could push out the working poor and immigrants.

"Maybe city officials think it's going to happen in five years," Kimura said. "Well, I've got news for them, it's already happening."