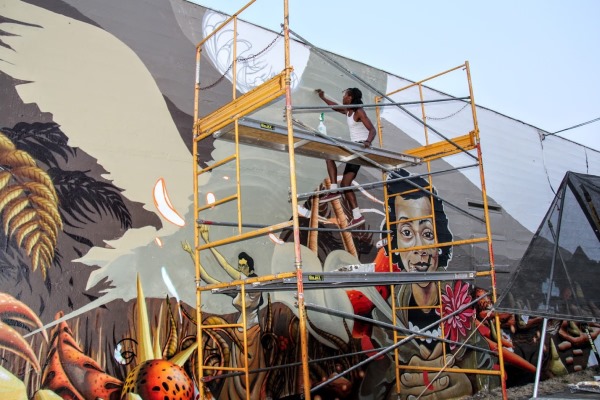 Not much about the Black United Fund of Oregon’s building on Alberta Street makes it jump out as the powerful civic and economic conduit that it is.

But a new mural, highlighting the contributions of female African-American freedom fighters, may help to change that.

To Angelou’s left stands a young girl looking at the dynamic women. She represents the continuation of leadership across time, according to Black United Fund executive director, Kimberlee Sheng, who also oversaw the image’s creative direction.

“I felt whatever we did [had to be] really significant in terms of this neighborhood, the history of the Black United Fund and just the grit and determination we’ve had to exhibit in order to push through,” Sheng said.

Furthermore, Sheng said, the work of women like those honored in the mural has enabled organizations like 27-year-old nonprofit she heads to continue carrying out its mission as an economic powerhouse stabilizing Black communities in Oregon.

Zoe Piliafas, who founded both organizations, said after passing the Black United Fund building on Christmas Day last year she was inspired to approach the organization to create an artistic project that would honor its history.”

“I think when we think about history, and the history that has not been addressed, women of color have been ignored in public spaces and I think that’s time that that changes,” said Piliafas, who is White. I think it’s moreover a testament to the staying power of the Black United Fund and women’s history.”

Sheng said being in what is now branded an “arts district,” individuals and organizations approach her organization “all the time” with offers to redecorate it. But Vox Siren’s commitment to keeping people of color at the forefront of the project won out.

Artists Eatcho and Jeremy Nichols, both local artists of color—have been responsible for getting the painting wrapped in the next coming weeks.

For Eatcho, a muralist whose work is usually more surrealist in nature, depicting these Black historic figures has been a welcomed shift from his normal work.

While he and Nichols draw toward the finish line, he said it’s worn on him emotionally but physically too.

“When you’re out there working on a mural and it’s 25 feet high to 100 feet across, it’s 100 degrees outside and you’re on a giant scaffold and you’re going back and forth, people just want to talk to you because they see a lot of color and they think a lot of things,” he said. “But really I’m having just as much of a time of work and endurance as it seems. So I’m working, just like a house painter, or a laborer, a construction worker. So when I’m up there I’m not only feeling [emotional], but I’m also having feelings of, ‘Man I’ve got to grab this paint. I’ve got to make sure my water’s up there, I’ve got to move my body, I’ve got to keep focused so I don’t fall off this two floor scaffold and die.’”

As the Alberta area, and the neighborhoods continue to gentrify, Piliafas said monuments like these become pertinent for both residents both new and old.

“Portland and the state of Oregon has a racist past, and we don’t recognize that, [but] there are many of us in the city now that are deciding that we can collectively do better,” she said.

The new mural echoes the Albina Mural Project – a 1978 mural project with a similar focus. The murals were removed five years after completion, reportedly due to water damage.

In five separate large-sized paintings, seven artists of color documented key transitional points in the African-American experience: the transatlantic slave trade, the migration of Black pioneers to the Northwest in the late 1800s, the following influx of African-Americans to the area in the late 1940s during World War II, the devastating Vanport flood of 1948 – and, finally, the civil rights movement of the 1960s.

Part of a Portland State documentary about the mural project is now on YouTube. In the video, painter Isaka Shamsud-Din tells the crowd during an unveiling, “I think we ought to bear in mind that we haven’t had many things of this size to happen in this community that have come all the way up from the community.”

Now once again, in a vastly different neighborhood, artists of a different generation are preparing to put their stamp on Black history once more.

“There are few community-serving organizations that are still located in this area. I think that it is significant and it does speak to the history of this neighborhood, but I think that there’s just broader implications for illustrating that we were once here in significant numbers and this was a thriving community when we were here,” Sheng said.

“And while the community may look different today, we’re still here. And we still have a place here. And there’s still a need for our work here.”