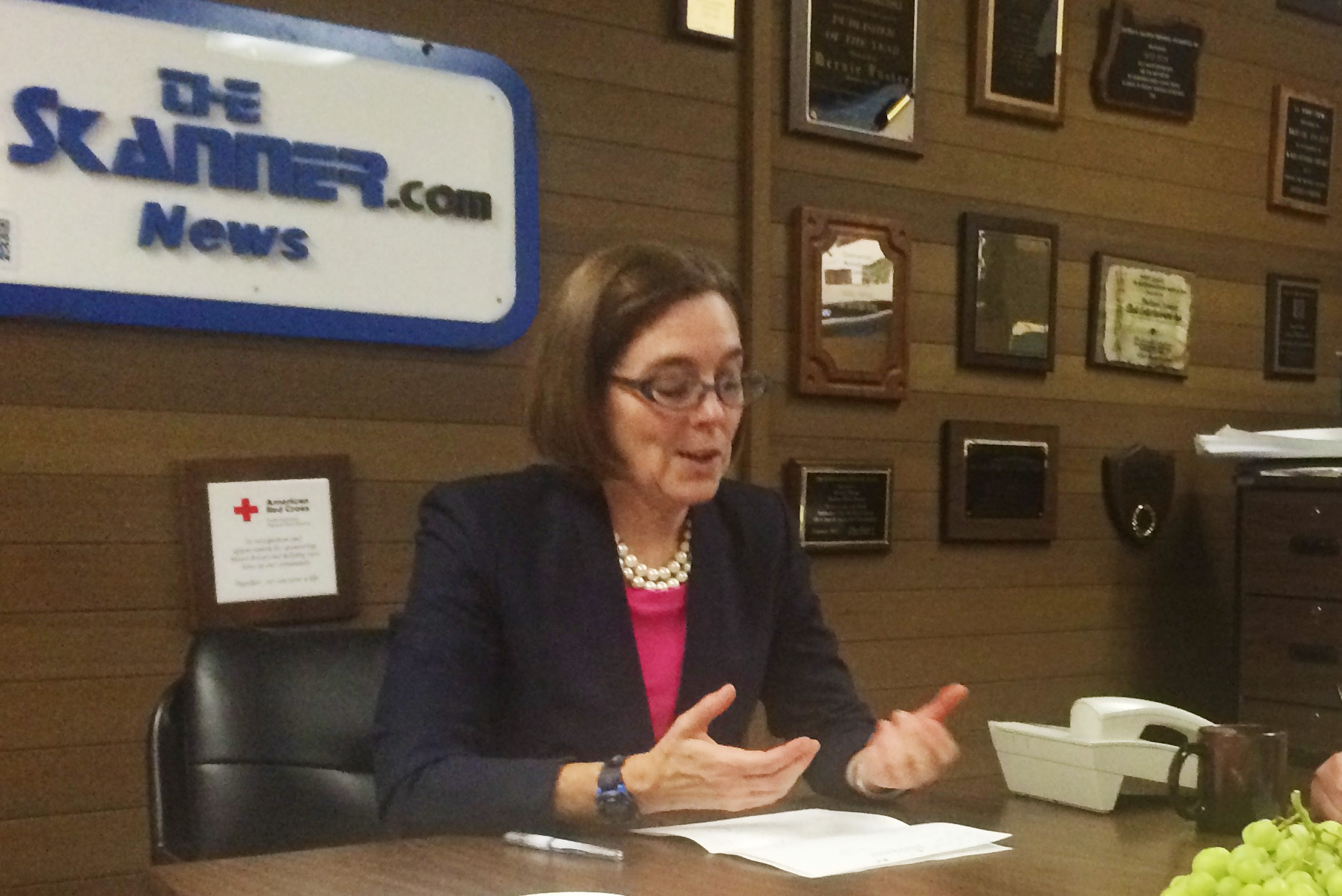 Gov. Kate Brown, who stepped into office Feb. 13,visited The Skanner News offices late last week to discuss her term so far, and talk about the way forward.

Priority number one, Brown says, is restoring Oregonians’ faith in government. (Brown, who had previously served as Oregon’s Secretary of State, was sworn into office following the resignation of Gov. John Kitzhaber amid an influence-peddling scandal involving his fiancée, Cylvia Hayes.) That includes strengthening the role of the Oregon Ethics Commission and pushing for greater government transparency, including the streamlining of public records exemptions, which was a priority during her tenure as Secretary of State. Brown told The Skanner she was happy to see progressive reforms like the Ban the Box bill, paid sick leave and portable 401k legislation pass this session. She also spoke in support of early childhood education and free community college initiatives that passed this year, and in support of future planned projects including job creation and addressing the opportunity gap.

Brown also told The Skanner she’s working to “weave equity into everything we do” in her administration – rather than treating it as an afterthought. Brown, who is bisexual, is the first governor in U.S. history to openly identify as a sexual minority. Following the introduction of her platform, she took questions from The Skanner staff about how her administration can address racial equity and diversity issues around the state, especially in Portland. The following exchange has been edited for length and clarity.

The Skanner News: When it comes to investing in education, there are a couple issues we want to follow up on. One is disproportionate investment. We’re finding that schools that are in predominantly minority neighborhoods are still not getting the same type of funding for the same types of programs, including STEM funding, as other schools. There was also a big issue in Portland Public Schools with disproportionate discipline. There has been some legislative action on the second issue in the last couple of years. What can we do at a state level to make sure that students get a safe education and also that they get equal access to education where they live?

Governor Kate Brown: I think that’s obviously very important. In my work as Secretary of State, we completed an audit on what was technically called the achievement gap. I call it the opportunity gap audit. It was really clear from the numbers that we saw across the state, specifically we sawat the eighth-grade level, in math and reading, we saw clear gaps between white students and students of color. We also saw huge gaps between economically disadvantaged students and economically advantaged students.

Not only do we have the gap in terms of students of color, we have the gap in terms of economically advantaged versus disadvantaged students. When you put those two factors together, it’s extremely distressing. For African-American students, it looks like two years behind in math, which is very distressing, given the importance that math will play and is continuing to play not only in our Oregon economy but our economy across the United States and across the world.

I think the key thing is to do everything we can to introduce the opportunity gap. That’s why I felt so strongly about working to invest in early childhood, making sure that children are ready to learn when they reach kindergarten.

The next piece is obviously making sure that all of our students are ready to read at third grade. If we can make significant investments in these arenas, I think that will help close the opportunity gap. But that’s not enough, and the audit made this really clear. There are key components that we need to see in all of our schools across the state, around leadership, about setting really high standards, about using what I call data-informed instruction.

All of these pieces need to be happening at every single school in the state. That’s something we can drive at the state level. Our new deputy superintendent of instruction, Salam Noor, has a pattern and a record of closing that achievement gap in the Salem-Keizer School District, and so he’s going to bring that leadership and that knowledge to the department.

KB: First of all, I have to tell you, I know $62 million sounds like a drop in the bucket. The full package that I introduced was 100 million, so we had to step back a little bit. But $62 million is a significant investment. We are looking at at least a couple thousand units and I think that's huge.

Of course, these are all over the state and not specifically in the metropolitan area and so there's still more work to be done. But, I am not one who gives up easy and I will continue to work on this issue.

But I think there's a couple of things that we did that will help drive it. And this is an issue not only in urban Oregon; it's an issue across this state. And that is, right now, a two bedroom apartment, a mom with two kids or a mom with one kid, the average cost is $864.

TSN: The average throughout the state?

KB: Yes, Portland's higher, right. That means she would have to work for 70 hours a week at our current minimum wage or she would have to be paid $16.61 an hour. So the reason why I encourage the business community to step up on our affordable housing package was because the minimum wage can't close that gap, right? It's very unlikely that we will ever be able to close the gap, and that's why it's so critical that the state take a leadership role.

The other thing we're doing, we've partnered, and I was able to tour a project in Pendleton, but we've partnered with private developers to build what I call "work-force housing." It was a regional solutions team project.

The challenge for areas like Pendleton, and I am not going to remember the percentage off the top of my head, but a huge percentage of workers in the Pendleton area drive in from other parts of Oregon or Washington, which means they are not living in our communities and they are not shopping in our communities. We want our people who are working in Oregon; we want them to live in Oregon.  So I think there's some creative public private partnerships we can do.

And then lastly I'll mention our IDA program, we were able to expand the program this legislative session, but essentially it is a private/public partnership to help families who need assistance with saving to do that. And folks get a tax credit for contributing and there are certain community non-profit organizations that partner to help deliver these. I think the fact that the legislature was able to build on this and expand the program was a really good opportunity.

So those are three things, there are certainly more. I look forward... I know that our county under chair Deborah Kafoury's leadership is really doing some great things. And I look forward to having some conversations with the county about how we can partner at a county and state-level as well.

TSN: Gov. Kitzhaber created and chaired an education board—the Oregon Education Investment Board -- that was supposed to improve Oregon schools through the dollars of powerful people in short. In the wake of Gov. Kitzhaber leaving your now current post, it is no longer. You were in support of its dissolving. There was a lot of money at the table with that board. Do you have a similar initiative in mind for education?

KB: For me, I think it’s critically important, I mentioned earlier, that we build a seamless system. And that was certainly a vision that Gov. Kitzhaber brought to the table. But I think that given our changing society and economics that it is critically important that we implement that in a very comprehensive way. One of the pieces that I didn’t mention was that we’ve funded full-day kindergarten, which has never happened in Oregon’s history.

You might remember Sen. Betty Roberts in the 1970s arguing for full-day kindergarten—well we were finally able to do that. So, I focused on the early childhood CTE (childhood teacher-educators) and affordability, post-high school, because I though those were key areas in this session where I could A) make a difference and B) where we could help drive the conversation around making sure that everybody has an open door and is able to achieve to their fullest potential in our education system.

So in terms of the OEIB specifically, for me I’m wanting to align the structure of our education system and we’ll be having some conversations now that the session’s done, about how to do that, but I don’t want to lose some key pieces.

One is making sure that we build in at every single opportunity closing the opportunity gap and number two, making sure that we make sure that we have the best teachers in the country. And toward that end, the legislature made significant investments, at my request, in our quality education teachers and I think all of us would agree that one of the most important things that you can have in the classroom is a qualified teacher and we’re going to be working with educators on how we drive that. So, there are a couple of key pieces. Lastly, I would just say I think we have some of the most talented educational leadership on board with Dr. Nancy Golden and Dr. Salam Noor, I think we should be able to work together and really drive this home.