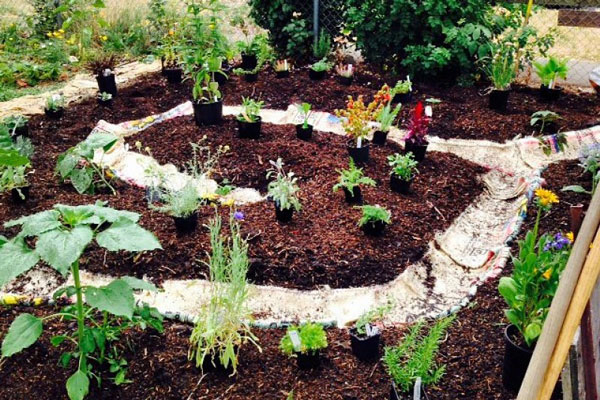 Galadriel Mozee is transforming her plot at the Portsmouth Community Garden in North Portland into a memorial for Black people lost to police violence, terrorism, and white supremacy after running a successful crowdfunding effort.

Mozee says she set up the campaign in the days following the massacre of nine people at the historically Black Emanuel African Methodist Episcopal Church in South Carolina last month.

“I was feeling really overwhelmed and just saddened by all the loss of life. Especially after the killings in the church, I was trying to think of a way that I could give back to my community in a way that’s meaningful for me,” she says.

Shortly after Dylann Roof’s attack at the historic church more than 2,500 miles away, Mozee set up a GoFundMe account for the memorial and within 24 hours, the project had been fully funded.

“I set it up and I knew that my friends would donate and then a friend texted me, ‘Have you looked at your GoFundMe?’ and I said no,” Mozee recalls. “I came back and looked and I couldn’t believe that in just a few hours it had already exceeded the goal.”

The $350 that Mozee asked for will purchase an abundance of plants: strawberries, sunflowers, lavender, coneflower, yarrow, bleeding heart, sage, borage, motherwort, red clover, oregano and thyme -- in addition in to other native herbs and flowers.

Mozee will also place rocks around the garden bed, each bearing the names of Black people whose lives have each been cut short due to systemic racist violence.

Most of what Mozee is choosing for the garden, she says she chose with a mindfulness of their healing qualities.

With the money raised, Mozee says she should be able to plant, cultivate, and maintain the memorial for several years into the future.

She and a crew of more than a dozen began readying the plot for the oncoming abundance of plants in the days following—even getting a head start on the green to come, laying down some of the seeds.

Mozee’s campaign was so successful she ended up with more than $500 in extra funding.

Instead of using those funds to add to the garden, Mozee has pledged to donate all the excess dollars to two organizations assisting the lives of people of color.

Half will go to the local chapter of Black PFLAG (Parents and Friends of Lesbians and Gays), with the second half going to the youth program of Queer Rock Camp for a scholarship created to assist a person of color with the costs of attendance.

According to Mozee, the community garden, located in the historically Black Portsmouth neighborhood, shares grounds with some surprising neighbors — skinheads.

“Their presence has scared me away from a space I had hoped would be healing and connecting for me and I was close to giving up my plot all together,” Mozee writes on the GoFundMe page. “But I'm tired of hate winning ground. So I'm taking a stand by doing what I love to do-- create love and healing for the community.”

So instead of leaving, Mozee is planting her feet firmly at the plot—returning this time to celebrate the lives of Black people through a tradition she says is not only of practical significance, but historical as well. “Black people need to have access to grow your own food. It is really such a wonderful way to reconnect with our heritage,” Mozee says.

Upon the garden’s completion, all that grows in it will be free and up for the community’s taking at any time during its opening hours.
Another work day will be planned to further help set up the Black Lives Matter Memorial Garden in the coming weeks.

Mozee will announce the next occurrence on a Facebook page she has set up for garden to keep the public updated on its development.

To stay updated on this project ‘like’ the page here: https://www.facebook.com/blmgardenpdx