Seahawk Speaks Out for Education 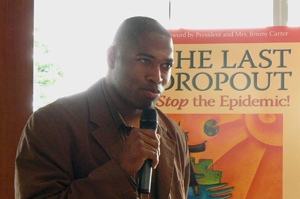 Every 33 minutes, a student in Washington State will drop out of school and nearly one in three students in our state will not receive their diploma. Those numbers are not acceptable according to Communities in Schools, the nation's largest dropout prevention organization.
Shaun Alexander, Seattle Seahawks running back, agreed to become the national spokesman for the organization to help keep students in school. Alexander will work with Communities in Schools on a national level, as well as with local affiliates in the Seattle area. Alexander joined the Seahawks in 2000 and is a three-time member of the NFC Pro Bowl team and NFL MVP and NFL Offensive Player of the Year.
Alexander and CIS made the formal announcement Monday night, July 16, and Alexander said he hopes to change the world for youth, especially young Black men.
"I want to change the world for the youth. I want to put some fire behind the will, and CIS is that will," Alexander said. He told some of the youth recipients in attendance, "Do what you're supposed to do best, do what you do to an amazing level."
A strong believer in giving back to the community, Alexander established the Shaun Alexander Family Foundation, which gives scholarships and has donated money to organizations and individuals. It is the first and only organization of its type to be started before the player was even drafted.
Alexander said that as a child his family always stressed the importance of getting a good education.
"If you don't have knowledge and don't know how to think, you won't be hired. No one hires people who don't know how to think," Alexander said.
Alexander said when he got to Seattle, no one came to the games, so he and his teammates decided that, if they wanted the fans to show up, they needed to step up and take responsibility and control.
"We just decided that this was our team, we have a chance to do something special and if no one shows up for the games, it's our fault and it's the same thing here," Alexander said. "Grab some ownership, we can spark the next great mind."
Bill Milliken, founder and vice chairman of CIS, called Alexander "a great example of the power of community involvement that is at the heart of Communities in Schools."
"We are honored to have someone of his impeccable character, who can serve as a role model for young people," Milliken said. "Shaun will be a tremendous asset as we move forward, helping us to spread the word about ending America's dropout crisis."
Milliken is also the author of "The Last Dropout: Stop the Epidemic!" and stressed the importance of making sure youth don't slip through the cracks.
"...That's why CIS is so important and vital to making sure our youth live up to and become their full potential," Milliken said.
CIS serves 1.2 million students annually and operates more than 3,400 schools in the nation in 27 states to keep youth in school and prepare them for life. Locally, there are 11 CIS organizations, which serve more than 24,000 students in the Puget Sound area.
CIS focuses on four core areas: individualized intervention; mentoring and tutoring; family assistance where parents can connect with a host of services so their children can focus on learning and after school programs where youth can get help with homework, learn about nutrition and get individualized attention.
In addition, CIS also increases the chance for student success by meeting their core needs such as providing eyeglasses or clothing, supplies or financial assistance so students can focus on their education.
Founded in 1977 and headquartered in Alexandria, Va., CIS began operating in the Puget Sound area in 1991 at the urging of Boeing, Costco Wholesale and others. CIS looks to local businesses to provide support in the development of youth — the future workforce. Costco Wholesale CEO Jim Sinegal was in attendance Monday night, and is a member of CIS' national leadership council.
Between 80 and 90 percent of CIS-tracked students show improvement in academic achievement, attendance, behavior and promotion to the next grade level.
"We have a proven track record and it works," said Renee S. Mona, CEO of CISWA. "Every student deserves to have a one-on-one relationship with a positive and caring adult they can turn to."
"We all share the common goal of making sure no other child drops out of school," Mona said. "We focus on finding the best possible means to help young people realize their full potential. Wouldn't it be great one day to say this really is the last dropout?"