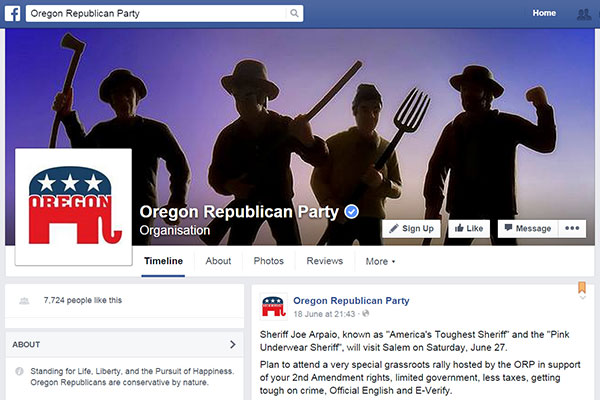 From April until late last week, the Oregon Republican Party’s Facebook page had a cover image that raised a few eyebrows.

The image features four dolls or action figures, standing side-by-side looking at the viewer. One bears an axe held high. Next to him is a man bearing a rifle. The next action figure clinches a pitchfork between his fist, while the last holds a club-like item in one hand while raising his clinched fist high.

The image, uploaded on April 19, remained the party’s cover photo up until June 26, following some comments on the page asking what message the image meant to send.

After receiving a call from a reader who said the image looked like a lynch mob, The Skanner contacted  the Oregon Republican Party for comment.

A woman identifying herself as the executive director declined to comment but said she would forward us to the Chair Bill Currier and vice chair Tyler Smith, who never followed up despite multiple attempts by The Skanner’s staff to make contact.

A reverse look-up of the image in question using Google revealed the possible origins of the photo, which shows up as the first result when searching for “angry mob” on Wikipedia.

“So Oregon Republicans are an angry mob now?” June 25 commenter Murray Sampson writes. “My Republican friends sure aren't. I'd guess they'd be embarrassed by this photo.”

The following day Carmen Carballo Bueck, the only other to remark on the photo on the group’s page expressed similar concerns writing, “Not sure how this is an appropriate representation of Republicans. I am new to the PNW, is violence or threats the method for getting things done in Oregon?”

NAACP Portland Chapter President Jo Ann Hardesty, when tapped for comment by The Skanner, says in the grand scheme of things this Facebook image “nears meaningless,” and that she has no problem with militancy as represented by dissatisfied mobs.

“It’s not up to me to castigate Republicans,” says Hardesty, a former member of the Oregon legislature. “No Democrats stood up against blanket exemptions in the state’s open records laws for evidence coming from police body cameras. Republicans have parity with Democrats in bringing people of color to the state legislature. Neither party values leadership development for folks currently on the downside of power.”

Sundown towns were places that, either by law or custom, excluded Blacks and Asians from living in these specific cities, or being present in them after dark.

Loewen says there were several sundown towns in Oregon. His research suggests Albany, Roseburg, Grants Pass, Medford, Ashland, Eugene, and Salem might all have been sundown towns.

Given that history, Loewen says, “To have an angry mob, menacing the viewer at sundown—that’s alarming.”

Previous cover images on the group’s Facebook include a mural of musket-bearing Union soldiers in battle, elder war veterans saluting, a man steering a John Deer tractor with two American flags, and a war scene from the medieval war-drama Braveheart starring Mel Gibson.

This past Saturday the Oregon Republican Party hosted noted Arizona Sheriff Joe Arpaio, noted for a tough stance on illegal immigration,  to Salem for a speech and fundraiser. About 100 people protested Arpaio’s appearance.

Though Democrats are the majority in the Oregon legislature this year, they only slightly maintain that edge—with a 35-25 split with Republicans in the House and an 18-12 advantage in the Senate.