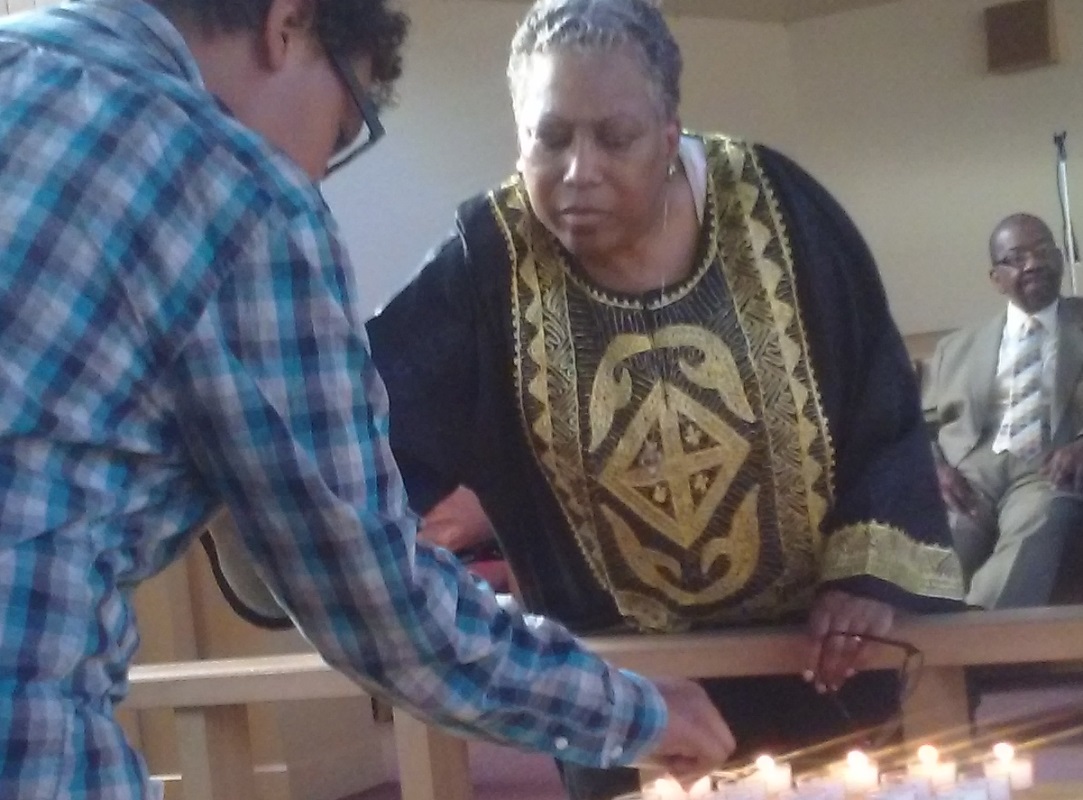 Faith, hope, fear, grief, rage and fellowship all rose to the surface last Thursday at the Bethel AME Church.

About 300 people came together Thursday at the church for a vigil to honor victims of last week’s racially-motivated shooting at the Mother Emanuel African Methodist Episcopal Church.

Dr. Leroy Haines of the Allen Temple and the Albina Ministerial Alliance told the congregation the shooting was a “crime against humanity.”

“We’re here because a young, white racist, possibly with mental issues, decided to deliberately and intentionally strike a blow for white supremacy,” Haines said. “We’re here to let the world know that God’s church cannot be stopped by terrorism.”

Within hours after the Wednesday-night slaying, Charleston police were describing the crime, which claimed nine lives, including that of pastor and state Sen. Clementa Pinckney, as a hate crime.

Civil rights activists across the country have called the shooting a terrorist act. They have noted that writings attributed to shooter Dylann Roof, a 21-year-old white man arrested Thursday morning in connection with the shooting, say he was inspired by organized far-right groups. The Federal Bureau of Investigation has declined to characterize the crime as terrorism.

Rev. W.J. Mark Knutson of the Augustana Lutheran Church in Northeast Portland said the Charleston shooting was the violation of a sanctuary. Roof had participated in a Bible-study activity before opening fire on the congregants.

“There is a disease in this nation called racism,” Knutson said in reference to speculation that Roof may have been mentally ill. He also said the notion that racism will die out with the older generation is false: “You have to teach every generation.” Churches, synagogues and mosques must come together to stand for justice and pray for a new day, he said.

Rev. Terry McCray Hill, pastor of the Bethel AME Church, presided over the gathering, which included music, prayer, a moment of silence and the reading of the names of the victims – and short remarks from leaders from several different faith communities. Hill also asked clergy and lay people of faith in the audience to introduce themselves as a show of solidarity and support.

“I just stopped by to tell you, it’s well in Charleston, South Carolina, because God is listening and he cares,” McCray Hill said at the onset of the service. She also quoted Rev. Martin Luther King: “Darkness cannot drive out darkness. Only light can do that. Hate cannot drive out hate. Only love can do that.”

McCray Hill described South Carolina as one of her “favorite places” and noted the strong presence of AME  churches in the state. The Mother Emanuel Church was founded in 1816 and it will last until eternity, she said.

Though urging a message of hope and faith, McCray Hill also told the audience she had not slept the previous night. She had stayed on the phone with a fellow AME pastor in Philadelphia, who had to end the conversation to talk to law enforcement about a possible threat to his church. She said before they hung up, he urged her to go to bed so she could be there for her congregation and for the community.

The vigil closed with a candle-lighting ceremony to honor the shooting victims. McCray Hill urged those in the congregation to make contact with two or three people they had never met before.

Shortly before the vigil, the Portland Police Bureau announced that it would have officers in the neighborhood while it took place. In addition to having a presence in the surrounding area, four uniformed officers stood in the lobby during the ceremony. Friday PPB announced it would provide extra patrols in areas neighboring houses of worship in Portland.

“Basically, it’s a response to what happened in Charleston and recognizing that people here in Portland are going to feel affected by it and apprehensive about going to their places of worship, not just at Black churches but all churches,” PPB spokesperson Sgt. Pete Simpson told The Skanner News.

Each precinct is responsible for determining coverage in its own area.

“It started over the weekend. I’ve not heard anything negative about the weekend or that there were any problems or issues.”

Nationwide discussion about the Confederate battle flag has turned a spotlight on the presence of the Mississippi flag – which incorporates the Confederate flag into its design – near the state capitol Salem. The Oregonian reported on the flag’s presence at a park near the capitol building in Salem, and have noted other state governments have passed laws prohibiting flying of the battle flag on their property. On Tuesday, Rep. Tobias Read (D-Beaverton) announced he planned to introduce a resolution calling for replacement of the flag.

The Willamette Week also reported this week on the presence of the battle flag at the Jefferson Davis Park in Ridgefield, Wash., outside Vancouver, just south of the Gee Creek Rest Area on I-5. The park, which opened in 2008, sits on a small parcel of privately-owned property owned by a group called the Sons of Confederate Veterans. The group describes itself as “non-political and non-Racist,” but Vancouver leaders from the National Association for the Advancement of Colored People told The Columbian Monday that the park and flag send a message of “bigotry, and divisiveness and hatred.”

Retailers, including Elmer’s Flag Shop in Northeast Portland as well as major sellers like Wal-Mart, Amazon and EBay, all announced Tuesday they would no longer be selling Confederate battle flags.