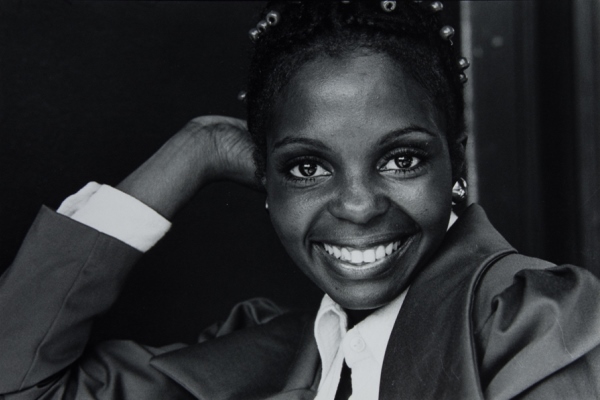 A Portland photographer wants help identifying amateur fashion models he worked with some four decades ago.

Bruce Forster, based out of his Southeast Portland home studio, said he rediscovered the photos ‑ which he shot in 1975 ‑ while sifting through some old material for inspiration. Forster, a former commercial photographer whose main focus has been commercial works, aerial shoots and stock photography met the models by happenstance and arranged a series of fashion shoots.

“They are absolutely beautiful,” he says.

The black-and-white images show the amateur fashion models in a variety of scenes. One puts on a slight grin on while leaves hide her hair above, while burying her feet below. Another displays a smile almost as big as her Afro, with one hand bearing a twig and sunglasses and the other squarely on her hip. In other photos, such as the portraits, the women seem more melancholy and mysterious.

And though Forster remembers capturing these moments, he cannot recall the names of these same women he’d captured all those years ago.

He’d like to change that, though. In fact, if possible, he’d like to convene all the women again for a “celebration of beauty,” as he calls it.

Forster estimates that the women were all somewhere around their 20s when he took the pictures back in 1975, putting them all somewhere in their 60s today.

“I can’t imagine if we can find one or two of the women that are still around here, that they wouldn’t know some of the friends,” Forster says. “Things could spread. It’d be fun to see it spread, and kind of grow. A reunion might happen!”

Already, he has some things in place for what reconnecting would look like.

Design Week Portland’s Todd Foulk has already agreed to display the images and next year’s festivities in April 2016. To sweeten the pot, if the women can be identified in time, Foulk’s agreed to allow free entry for each of them.

But that’s just one option of many he’s open to. He’d also like to recreate the photo shoots, if the models are interested.

But just how did Forster meet these aspiring models, anyway?

Forster told The Skanner it was right after finishing up a gig near Jantzen Beach. He was just getting ready to leave when he became captivated by a group of women.

“The light was bouncing into this corridor, where are these women were lined up to go on to the stage to do this fashion presentation,” he recalled. “And the light was so beautiful. The girls were so beautiful that I just started shooting away.”

After the impromptu shoot, Forster and some of the women exchanged contact information.

Shortly thereafter, he began meeting with them mostly downtown, individually or in pairs, and shooting them free of charge.

Word of mouth start to spread, and a few other women joined Forster for the downtown fashion shoots.

More than 60 rolls of film forever encapsulate the handful of outings Forster went on with the women.

Forster says he wonders today what became of the models’ fashion careers—calling them “naturals.”

While the downtown shoots were leisure projects for Forster, in rediscovering the images, he saw that he had developed some of the images and even mounted some of them onto frames ‑ something he says he wouldn’t have done if he didn’t have a further plan for them.

“If something fun were to get rolling with this [I could] go back in and unearth some more images that would be worth printing,” he says.

Ultimately, with all the mystery surrounding these six women, and the images, Forster says ultimately he’d just like to put some names to those forever immortalized faces from 40 years ago.

“I don’t have any super plan. But I thought if we were able to get some of these shots out into the world that somebody might recognize somebody.”

If you have any tips on identifying these women, contact Bruce Forster at bruceforsterphotography@gmail.com.